Before we get to the cool skin lesion quiz, first a couple of updates!

Get your flu shot! 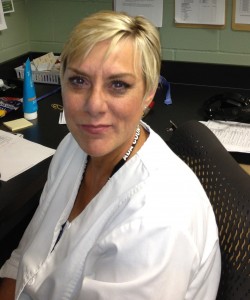 Robin, at the Ada County Jail in Boise, should get her flu shot!

Influenza shots are here.  Be sure to get yours.  I didn’t get my flu shot last year and subsequently came down with true influenza–NOT a fun experience.  I wrote about that experience here: Should the Flu Vaccine Be Mandatory?  Influenza is way worse than the shot.

Even worse than that, I potentially infected my patients and colleagues before I knew I was sick (since you shed viruses for 36-48 hours before symptoms start).  It has been shown in more than one study that the best way to reduce influenza rates in institutionalized patients is to immunize the staff.  This is so important that some hospitals even require it–there is no choice; if you want to work there, you have to get a flu shot.

Coercion probably won’t catch on in correctional facilities.  However, voluntary immunization rates for the staffs of hospitals, nursing homes (and presumably correctional facilities, as well) is usually well under 50%.  But it has been shown that a good program pushing the vaccination can significantly increase that.

So go forth and do this:

2.  Do something to increase the immunization rate among both your medical staff and correctional staff.

Question of the Week: Flagyl Abuse?

I’m an RN at a 600+ bed jail and can’t figure out what is going on with Flagyl. Suddenly, I have a huge spike of female inmates asking for it by name. Usually, that indicates they’ve figured out a way to abuse a medication. Just in case that’s the deal, I’ve instituted a policy that they only get Flagyl if they’ve had a vaginal exam. Most of the time, they decline (we figured out to do that when all the females were asking for hemorrhoid cream and we found out they were using it on their faces! Cheap moisturizer! So, we told them to “show” us their hemorrhoids. Suddenly, no one had them). But, still, I’m confused!

I’ve searched the web and can’t find anything on Flagyl being misused, so I’m not sure where this spike is coming from, unless one of them has mentioned it as a wonder drug for “down there” and they’ve all just latched on. Do you have any idea? Any jails experiencing this? Any anecdotal evidence? The side effects aren’t of the variety people want (nausea, vomiting, tingling, dry mouth), so I just don’t get it!

Well, Emily, back when I was a practicing ER doc, I occasionally saw patients who had been to a “Flagyl Party.” This involves deliberately taking Flagyl with alcohol.  Flagyl has a disulfiram (Antabuse)-type reaction when taken with alcohol, which evidently these party-goers found amusing.  However, I didn’t think the fun times would work without the alcohol.  Can you get a similar reaction combining Flagyl with psychiatric meds?  I’ve never run into this at my jails, but I understand your suspicion!

If you readers have seen Flagyl abuse at your facility, please comment below!

What Is That Skin Lesion? 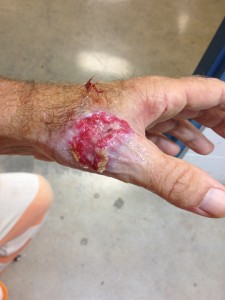 The patient is a 59 y.o. male who first noticed the lesion “a couple” of years ago, has never seen a doctor about it and has just been covering it up.  He reports it began to weep a couple of months ago.

Make your guess, then click here for the answer:

I have to admit I got this wrong.  I thought it was a squamous cell cancer, but when it was biopsied, it was a basal cell carcinoma.  Either way, it has to come off and given the location directly over a joint, this will not be a small surgery!

Do you have an opinion about mandatory influenza vaccines?

Have you seen Flagyl abuse at your facility?

Did you get the skin lesion quiz right?

2 thoughts on “What’s That Skin Lesion? Plus updates.”