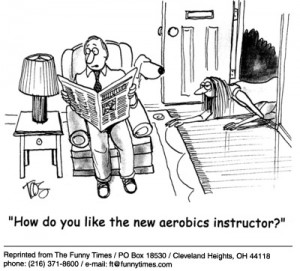 Rhabdomyolysis is one of those diseases, like acute alcohol withdrawal, that I have seen much more commonly in my jails than I ever did when I worked in the emergency department.

Rhabdomyolysis occurs when skeletal muscle cells die and rupture, releasing the protein myoglobin into the blood stream.  The kidneys attempt to clear the myoglobin,  however, if the concentration of myoglobin is too high, it will literally solidify inside the renal tubules, causing kidney failure.  This is considered bad! 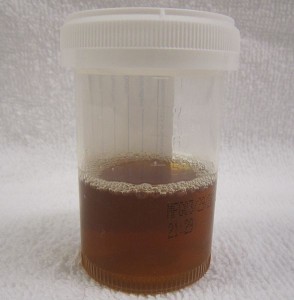 There are two main symptoms of rhabdomyolysis.  The first is dark “Coca-cola” urine caused by myoglobin in the urine.  The second major symptom is pain in the affected muscles caused by the inflammatory chemicals.  The affected muscles will tighten up, commonly causing a unique stork-like walk in which the patient can’t bend his knees or hips well.  After you have seen a few of these patients, you can pick them out by their gait alone!

There are two main blood tests that can confirm the diagnosis and help you determine how serious this particular case is.  The first is creatinine phosphokinase (CPK), which is an enzyme found inside muscle cells.  Like myoglobin, CPK is released into the blood when muscle cells rupture.  You can to some extent gauge the amount of muscle damage by how high the CPK climbs.  Rhabdomyolysis can be diagnosed by a CPK 5 times greater than normal but may exceed 100,000 in severe cases.  BUN and creatinine, the kidney function tests, are also critical to obtain to determine if the rhabdomyolysis is severe enough to cause renal impairment.  There are several other tests that may help in particular cases, such as urine myoglobin, electrolytes and CO2 (for acidosis).

Treatment for rhabdomyolysis is to clear the myogobin.  In most cases, this can be done by aggressively hydrating the patient, either orally or with IV fluids, which gives the kidneys the water they need to flush the myoglobin without its solidifying in the renal tubules.  In bad cases with very high CPK levels and kidney failure, hemodialysis may be needed.

Several things can cause rhabdomyolysis, but these are the Big Three:  Overexertion, crush trauma, and drugs.  I have seen all three in my jails.

1.  Most cases of rhabdomyolysis in correctional facilities are caused by over-exertion.  There is the guy who thinks he can squat as much weight as he did in high school ten years ago.  There is the “initiation” into the dorm consisting of 200-300 squats.  Usually, these are not too serious if the patients come to the medical clinic right away so we can hydrate them.  My first case is a patient who did lots of heavy squats four days previously.  He walked like a stork and had almost black urine.  His initial CPK was over 150,000 and his initial BUN and creatinine were slightly elevated, indicating that he already had renal involvement by the time we first saw him.  We treated him with two cycles of two liter IV hydration, then rechecked his labs.  His kidney function had actually worsened a little bit.  So we sent him to the hospital where he underwent two days of hemodialysis. He did eventually recover, a little wiser, I hope.  This case emphasizes the importance of early and aggressive hydration.

2.  Rhabdomyolysis can be caused by drugs, as well as overexertion.  The major culprits are the statins, antipsychotics and serotonin agents (like the SSRIs).  My second case was a patient who had been acting out and so had received a single ten milligram dose of Haldol.  When he woke up the next morning, he had rhabdomyolysis involving his legs (so he had the stork-walk) but also his arms and upper back.  His CPK rose to just over 100,000 but with aggressive IV hydration, his kidney function remained normal.  He recovered and received no more Haldol!  Think about checking a CPK when patients on one of these drugs complain of muscle pain and weakness.

3.  Probably the most common cause of rhabdomyolysis that I saw in my ER days were caused by direct muscle trauma, like the elderly patient who had a stroke and laid on the floor without moving for three days.  The combination of dehydration and direct pressure injury to the muscles the patient was lying on can cause severe rhabdomyolysis.  That sort of thing can happen in jails, too.  My third case of rhabdomyolysis was a patient who had tied a bed sheet tightly around her neck in a suicide attempt.  She was discovered by detention deputies before she suffered serious injury, but she did develop a mild case of rhabdomyolysis from the trauma to her neck muscles. She did not develop “tea-colored” urine (milder cases of rhabdomyolysis sometimes do not, though myoglobinuria can still be demonstrated by dip stick testing), but her CPK rose to around 20,000 and she certainly had sore neck muscles for a while.

Have you had an interesting or unusual case of rhabdomyolysis at your facility?  Please comment!

13 thoughts on “Three Cases (and Three Causes) of Rhabdomyolysis”