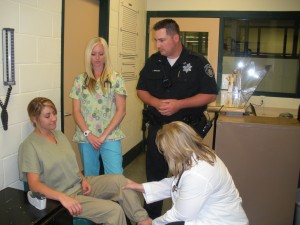 Staged medical clinic at the Bonneville County Jail, Idaho Falls, Idaho. (The “patient” is actually one of the medical staff)

We recently had a 46-year-old male patient booked into our jail who reported a history of diabetes but who had not seen a physician or taken any medications for “years.”  He said he used to take a medication for diabetes “a long time ago” but he could not remember the name.  He also could not remember the name of the doctor he had once seen.  He reported basically no other medical history.

How we approach this patient in a jail depends a lot on his legal situation. If he were charged with a big felony so I was reasonably sure he would be in jail under my care for several months, I could prepare a long care plan involving education, medications, monitoring, etc. However, as it turns out, this guy had a misdemeanor charge and I will only have him for a short while. I won’t have time to do everything, so I will have to prioritize. What is most important and what can wait?

1. The single most important thing I could possibly do for this patient during his stay in jail will be to convince him that he is sick. Type 2 diabetes is often asymptomatic, as it is in this guy.  He certainly is not a complainer! If I can teach him about his disease and convince him that therapy can help him and even improve the quality of his life, he might actually go see a doctor when he gets out.   If I do not succeed in this goal, it will not matter what I do in jail.  Who cares that he took meds for a couple of weeks if he immediately stops them when he gets out of jail?

2. The single most important treatment we can give to this patient is to educate him about diet and losing weight.  Type 2 diabetes can be thought of as the pancreatic insulin system getting overwhelmed by more carbohydrate sugar than it can handle.  He needs to give up the “junk” carbs that he loves.  In fact, if I prescribe nothing, he still likely would improve while he is in jail, because he will not be able to raid the refrigerator at 2:00 AM and cruise through the McDonald’s drive through anytime he wants.  Initially, he will get three diabetic diet meals a day.  Hopefully, he will not refuse this diet and insist on a regular diet–that is one of the important points we are going to address in our education.  Also, hopefully, he will not sabotage his diet when he gains access to the crap they sell on the inmate commissary.

3.  The next most important thing we can do for this patient is to get him set up with some physician or clinic when he gets out of jail.  I don’t want him to have to get out the phone book when he gets home and start calling doctor offices.  He is likely to get a succession of “we aren’t taking new patients” or “we don’t accept Medicaid” or “the first available appointment is in five months.”  We know the local doctors and clinics; we work with them all the time.  We know who to send him to if he has Medicaid and who to send him to if he has no insurance at all.  We also can finagle an appointment for him within a week of his release.  We can arrange to have the clinic call him to remind him of this appointment.  If we do not do this discharge planning, the odds are that he will simply stop taking his meds as soon as he hits the street and we will have wasted our time.

4.  It is more important to treat his hypertension than his hyperglycemia.  We are going to treat both, but if we just treated one, he would get more benefit from the control of his blood pressure than from the control of his blood sugar.  Lots of studies looking at mortality and morbidity in type 2 diabetics have shown this; it is not even that controversial any more.   Essential Evidence Plus (one of my favorite research sites) says: “Intensive blood pressure control and lipid lowering, along with smoking cessation, reduce complications and mortality in patients with type 2 diabetes and should be the primary treatment goals.”  I will probably start with HCTZ and lisinopril in this patient, at initial doses that are unlikely to cause side effects.  I do not want him to get some side effect and say “This sucks!  I’m not taking this crap!”

5.  The single most important diabetic medication this patient should be on is metformin.  This is the only medication that has been shown to reduce mortality and morbidity in Type 2 diabetics.  Essential Evidence again:  “Metformin lowers all-cause mortality independent of glycemic control; similar mortality benefits have not yet been demonstrated for insulin or the other hypoglycemic agents.” However, if you prescribe metformin at high doses right off the bat (say 1000mg BID), it very commonly causes diarrhea and GI upset and then patients will refuse to take it.  We should begin at 500 q Day and then increase by 500 a day every week or even two weeks until we get to 1000 mg BID.

6.  This patient most likely should be on insulin, as well, not an oral hypoglycemic.  Early on in the course of Type 2 diabetes, patients have abnormally high levels of insulin as their own pancreatic Beta cells try (and fail) to keep up with the carbohydrate load these patients eat.  Eventually, over many years, the Beta cells burn themselves out and die.  At that point, endogenous insulin levels fall below those produced by non-diabetics.  This is the so-called “Type 1 1/2 Diabetes.”  This patient has had untreated diabetes for many years and his excessively high blood sugars indicate that he is well into the late stages of his disease.  Oral hypoglycemics will flog his Beta cells, of course, but since most of his Beta cells are probably dead, it likely will not do much good.  He is at the insulin stage.  The trick will be getting him to accept this therapy.  I would start with Lantus (because that is what we use at our facility, other long acting agents would be fine, as well).  We then would adjust his insulin–and continue our teaching–every 2-3 days while we have him.

7.  He should have his lipids checked and he should be screened for other potential diabetic complications, like kidney disease.  We can do this at the jail if he stays with us long enough or we can defer this to the outside practitioner if his stay with us is short.

This case highlights one reason I so like correctional medicine.  We often have the opportunity, as in this patient, to make a real difference in our patients’ lives.

As always, what I have written here is my opinion.  Feel free to disagree!  But please tell me why you disagree so I can learn from you.  How would a similar patient be handled at your facility?

2 thoughts on “Thoughts on an Untreated Type 2 Diabetic”