The problem is that this concept of a “hypertensive urgency” is a myth.  It is not in this patient’s best interest to acutely lower his blood pressure.  In order to explain why, I need to give a brief history this concept. 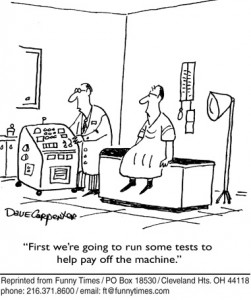 Medical doctors did indeed once believe that there was a hypertensive urgency.  I myself was taught this when I did my emergency medicine residency in Akron, Ohio in the 1980s.  At that time, it was taught that there were two types of critical hypertension that I would have to deal with in the emergency department.

The other type of acute hypertensive problem we learned about at the time was this “Hypertensive Urgency.”  This was defined at the time as a diastolic blood pressure of over 110 in an otherwise asymptomatic patient.  It was taught then that this blood pressure was so high, that even though the patient felt well, they were at high risk of suddenly having something bad happen, like a stroke.  Because of the fear of this risk, the patient was given a medication to lower the blood pressure within minutes.  The two most common medications used to do this were clonodine (Catapress) and nifedipine (Procardia).  In my early years working in the emergency department, I used to treat patients in this way all of the time.  The first editions of national guidelines on the treatment of hypertension, like the Joint National Committee guidelines in The Prevention, Detection, Evaluation, and Treatment of High Blood Pressure, contained a section devoted to this practice.

But then in the 1980s and the 1990s, research done on this practice showed a couple of disturbing things:

1.  Clonodine, nifedipine and the other drugs used to treat a “Hypertensive Urgency” did lower the blood pressure.  But when these patients were followed further, it was found that their blood pressures returned to the pretreatment levels almost as soon as they got home.  The treatment lasted, at most, several hours.

2. Some patients who had their blood pressures lowered in this way had strokes.  The reason for this is what is known as the “perfusion pressure” of the brain.  Simplistically stated, suddenly lowering the blood pressure in some patients lowers the delivery of blood to the brain to critical levels, which can cause an acute stroke.

3.  In fact, when large groups of patients with the so-called hypertensive urgency were evaluated, those treated with clonodine or nifedipine or other drugs do worse overall than those not treated.

The bottom line is that rapidly lowering the blood pressure of those with high blood pressure gives no benefit and may cause harm.  Because of this and other research, the concept of the hypertensive urgency has been dropped from the medical literature.

For example, the  seventh edition of the Joint National Committee guidelines in The Prevention, Detection, Evaluation, and Treatment of High Blood Pressure (JNC -7) (found here) does not recommend the administration of antihypertensive agents to acutely lower BP in the absence of “end-organ damage.”

Similarly,  the clinical policy published by the American College of Emergency Physicians (ACEP) (found here, second from the bottom) states:

So what should be done with the patient my nurse called me about?  The first thing is to verify that the reading of 220/110 is accurate.   Sometimes BP machines can give inaccurate numbers.  I have seen inmates who could artificially elevate their blood pressures by surreptitiously flexing their biceps during the reading.  One way to quickly verify the blood pressure result is to take the blood pressure in both arms, one after the other, then wait 5-10 minutes and take a BP reading again in both arms, but this time manually.  This gives you four BP readings.  Let’s assume that these four readings consistently showed a blood pressure of around 220/110.

This particular patient already was taking three blood pressure medications prescribed by his outside physician, so he falls into the category of “poorly controlled hypertension.”  By far and away, the most common cause of poorly controlled hypertension is noncompliance– the patient has not been taking his blood pressure medications properly.  I know that this patient has been taking them for the couple of days he has been in the jail but I do not know if he was taking them on the outside.  Most likely, he was not. (I wrote about this previously in “The Compliance Trap,” found here ).  Since he has only been in jail only for a short time, I think the most reasonable course is to continue him on his current medication regimen and schedule him for a Hypertension Chronic Care follow-up in about a month.  He will have been on his current three drug regimen for a month then, and I will have a pretty good idea of how well it is working.  If I schedule him for routine blood pressure checks in the meantime, I would do this no more often than one week apart.

However, let’s assume that this patient with the blood pressure of 230/120 has no previous diagnosis of hypertension and is on no medications.  What should be done with him?  Well, even though he has not known about it, he has probably had hypertension for a long time.  There is no urgency to start him on any medications right now.  Emergency Medicine guidelines say that emergency physicians do not have to start blood pressure medications in the ED as long as they have arranged follow-up with a primary care physician.  In a correctional facility, this consists of scheduling this patient for the next medical clinic where his hypertension work up and therapy can begin.

I know that many of my colleagues prefer to start a hypertension medication such as a diuretic or a diuretic/ACE inhibitor combo right away via phone order rather than wait until clinic.  I think this is OK as long as the patient is still scheduled to be seen in the next clinic. However, there are a couple of problems with this approach.  One is that statistically, patients with an isolated BP reading of >160/100 (stage 2 hypertension by JNC-7 criteria) have a 90+% chance of having the diagnosis of hypertension eventually confirmed.  This is a pretty high percentage, but it is not 100%.  There are occasionally false positives for various reasons.  Second, you are beginning therapy for a chronic, perhaps life-long disease process, without having discussed this with the patient.  Nor have you discussed potential side effects and potential side effects of the medications you are beginning.  You have not discussed lifestyle changes that are at least as effective as medications.  You have not given the patient a chance to be an informed partner in the decision making process.

The whole point is that there is no rush, no urgency, in this situation.  The idea of a “Hypertensive Urgency” has turned out to be a myth.  In my mind, it is better to bring the patient to the next medical clinic, verify the diagnosis with repeat blood pressures, do the work up, and discuss the diagnosis and treatment options with the patient.

How do you handle big blood pressures at your facility?  Anybody out there still use nifedipine or clonodine?