These rates tell us despite our efforts in training, education and suicide prevention within our jails and prisons, people are still choosing to take their own lives.

Suicide is the intentional ending of one’s own life. Think about that.  Just sit and think about the fact that thousands of individual human beings, every year, decide that the life they have should end.  Many of these individuals experienced emotional and cognitive distress beyond what they believed they could handle and saw death as the best possible choice in the moment.  They likely felt alone, isolated, trapped and hopeless.  Like there was nowhere to turn. We can change that.

END_OF_DOCUMENT_TOKEN_TO_BE_REPLACED 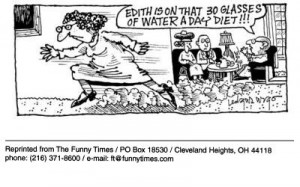 I have two patients in my jails right now who are not eating.  When I was told about these patients, the term “Hunger Strike” was used, as in “We have a new patient on a hunger strike.”  However, “Hunger Strike” does not seem to be the right term to me for these two patients.   I prefer “Hunger Games” for the majority of the patients who stop eating for awhile.  “Hunger Strike” evokes memories of people like Bobby Sands.

I am old enough to remember when Bobby Sands starved himself to death. END_OF_DOCUMENT_TOKEN_TO_BE_REPLACED