One of the most fearful and frustrating events in my correctional medicine world used to be when a new chronic pain patient would arrive in my clinic.  A typical patient would be a “Ralph,” a middle-aged man who has had chronic back pain for many years.  Ralph has had a couple of back surgeries, steroid injections and more than one kind of stimulator, none of which has been effective.  He arrived at the jail taking a long list of sedating medications such as muscle relaxers, gabapentin, and sleeping aids plus, of course, big opioids.  In addition, Ralph has alcohol abuse issues.  The reason he is in jail is a felony DUI charge.  Now he is in my medical clinic, looking expectantly at me.  How am I going to fix his pain problem?

The answer, of course, is that I am not.  I am not that smart.  He has already seen lots of doctors, including pain specialists and surgeons, who have tried almost everything that can be tried and they have not fixed his chronic pain problem.  I’m not going to be able to, either.  In my opinion, the most common and serious mistake made in the treatment of chronic pain in corrections is when we imply that we can eliminate chronic pain.

END_OF_DOCUMENT_TOKEN_TO_BE_REPLACED

I recently ran across this news article on NPR (found here) about the problem of treating the large number of opioid addicted patients who are coming to our jails. There is a growing movement that all opioid addicted patients should be offered Medication-Assisted Treatment (MAT) while in jail–meaning one or more of three drugs: methadone, Suboxone or Vivitrol. The article does a good job in pointing out that this is a complicated problem. Having been on the front lines of this problem for many years in my own jails (and so having that great teacher–experience), I would like today to present my own thoughts on using MAT in jails. (MAT in prisons is a separate subject that I will address later).

END_OF_DOCUMENT_TOKEN_TO_BE_REPLACED

For many years after I came to work in jails, I was confused as to why those incarcerated in my jails were referred to with such varied and stilted names. 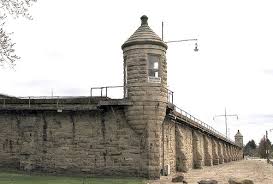 IDOC (the Idaho Department of Corrections) calls its charges offenders.    The Federal Agencies, both ICE and the Federal Marshals, say detainees. The deputies and administrators of the jails use the word Inmates.

I have always been interested in linguistics and etymology (the study of where words come from).  I had always thought that inmate was the correct term for someone incarcerated in a jail or prison. It turns out that the word inmate dates from the 1500s and originally meant someone who was living in a house rented by another.  It derives simply from inn (an inn, of course, but also inside) and mate (companion).  Over time, inmate came to refer to anyone who lived with many other people in a single dwelling.  By the 1830s, the term inmate carried the connotation of the person being confined to the residence, i.e., housed involuntarily.  You were an inmate if you lived with many other people but were housed there against your will.

Among the places where you could be housed against your will originally included hospitals but I don’t think it does, anymore.  If your grandmother was on the medical floor of the local hospital, you would not refer to her as being an inmate.  I think this is so because even though grandma might not have wanted to be there at the hospital, she could leave anytime she liked.

So this is the meaning of the word inmate as it is understood now:  a person who has been has been remanded by some sort of authority to stay at some facility against their will and which they cannot simply leave.  That would apply to residents of jails, prisons and juvenile facilities but also secure psychiatric hospitals.

Understood in this way, inmate seems to be an appropriate descriptive term for residents of our correctional facilities. It also is without any sort of negative connotations, at least that I was aware of.  So why the use of offender or detainee?  They just seem cumbersome and don’t work as well as the original English word inmate.

But then I ran across this interesting website, Prison News Blog, in which the incarcerated author explains the hostility to the word inmate. Evidently, there are two terms in prison culture for someone incarcerated there:  inmate and convict. One does not want to be an inmate.  Inmate is a derisive term, even an insult, because it is believed to imply that the person is a fawning “good little boy,” so to speak.

In the parlance of the penitentiary, we generally understand an inmate as one who becomes a little bit too closely aligned with the institution and its rules. Inmates are quick to engage in conversation with staff members. It seems as if inmates suffer a bit from the Stockholm Syndrome, where they identify more with their captors than with others who share their captivity.

Instead, those incarcerated in prisons prefer to think of themselves as “convicts.”  A convict, in prison culture, is defiant and his own man.

Convicts differ from inmates. Convicts may abide by the rules, but only because they want to avoid additional aggravations or frustrations. Yet if he believes breaking a rule would be in his interest, he will make his choice and live with the consequences. A convict would never cooperate with a staff member in some kind of diabolical deal to spare himself. Convicts have an air of defiance. He may suppress that defiance, though he feels it coursing through his veins.

After reading this, I wondered who had decided that inmate and convict had these different meanings in prison?  And on what basis?  I understand better where this definition of “convict” came from.  As a convict, you have been convicted of some crime.  By the rules of polite society, you are a bad boy.  By preferring to be called a convict, you are embracing your antisocial nature.   It also has some cool harsh consonants that sound manly!

The term inmate, however, has never implicitly meant that you are a good boy or that you are a sheep.  That meaning has been made up.  Throughout its history, inmate has never meant complicit or cooperative.  Quite the opposite, in fact.  The historical meaning is that you are being held against your will.  The closest synonym is prisoner.

And this inmate vs. convict dichotomy cannot be applied to many correctional institutions.  Most inmates in jails have not been convicted yet, and so cannot properly be called convicts.  They are pretrial detainees.  And also inmates, of course.  It does not even apply to all prisons.  Many of the residents of Guantanamo prison are not convicts; but they are all inmates.

Nevertheless, I understand that the inmate/convict labels, as described in the Prison News Blog, have become well established usage at most of the prisons in the United States to the point that it truly is a grievous insult to refer to someone as an inmate.  Prison officials haven’t wanted to perpetuate the anti-social meaning of the word convict, and so they have come up with the clumsy term offender.  Similarly, federal officials prefer the term detainees. (Although I wonder what would have happened if prison officials instead had adopted the term convict and applied it to everyone, the cooperative and non-cooperative, alike.  Would that eventually have defused the antisocial meaning being given to the word?)

So far, this has not been a problem in my jails, which are off the beaten path in a less populous state.  We still use the term inmate and so far, have not had any objections, even from the IDOC, ICE and Federal Marshal inmates that we house.  If it ever becomes a problem in the future—well, I guess I will be saying “the detainees that we house.”

Do you use the term inmate at your facility?  How about convict?  Please comment!