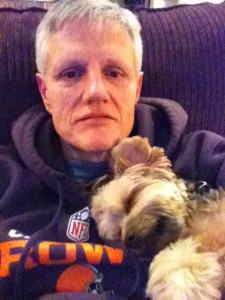 Recovering at home with Ed the dog.

So I caught the flu last week and I have been pretty miserably sick for going on 7 days; fever, achy, cough.  Also cranky, peevish, and insufferable.  My hair hurts!  Is that even possible?

I usually get a flu shot, but I didn’t get one this year.  Why not?  I just didn’t get around to it.  It would have been easy.  All I had to do is ask one of the nurses to give me one back in the fall when we were doing them.  Duh.

The CDC announced the official onset of influenza season a couple of weeks ago.  Flu season is extraordinarily late, probably due to the mild winter most of us (me included) have experienced this year.

Coincidentally, around the same time as this announcement (and before I myself caught the dreaded bug), I ran across a couple of thought-provoking articles dealing with the flu that are relevant to our institutionalized patients.

The results were remarkable.  Of course, the health care staff in the vaccination group took fewer sick days; that’s a no-brainer.  And, of course, there were also fewer cases of influenza among the residents,  even though their own immunization rates were identical to the control nursing homes.

But these nursing home residents also had fewer hospitalizations and significantly fewer deaths!

This finding has since been verified in other studies, including this one.

The idea here is that as a health care worker, when you are deciding whether or not to get the influenza vaccine each year, it is not only your own health you should take into consideration, but also that of your patients.  Since influenza patients shed virus for a couple of days before they know they are sick, you may have a couple of days at work infecting your patients (and your co-workers) before you take sick leave. (So how many people have I infected this last week?)

As a result of studies like these, there is a movement afoot to require health care staff to receive influenza vaccinations in order to work.  Here is an editorial published recently in the Lancet in support of this idea: Time to Mandate Influenza Vaccination in Health-Care Workers.

Forced immunization is not just an idea of the nutty English, either (actually, the editorial was written by an American).  The American Academy of Pediatrics supports this idea. I have heard that some US hospitals have already instituted this policy, notable Virginia Mason Hospital and the Mayo Clinic.  Once hospitals mandate influenza vaccination, staff immunization rates go from around 50% to 99%.

However, I just don’t see mandatory influenza vaccination programs going anywhere in corrections.  Any opinions about this out there? Has anyone tried it?

But there are ways to increase the staff immunization rates at your facility.  Mostly, this involves just pushing the idea.  Here is a study about a program in one hospital in which health care workers attended a little 15 minute lecture on the importance of getting the flu vaccine: Flu in 15: a novel 15-minute education program to promote acceptance of the influenza vaccine among health care workers. Even better than this is to assign one person or a group to vaccinate every health care worker in your facility.  You track down the thoughtless and irresponsible doctor (that would be me) and given him his damn shot! In order not to get the influenza vaccine, health care staff would have to refuse in writing.

Any opinions about this?  What is the immunization rate among health care workers at your facility?  How about among the detention staff?

1 thought on “Should the Flu Vaccine be Mandatory?”