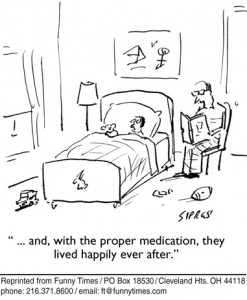 One thing that has long bugged me about how medicine is practiced in the United States is that medical professionals for the most part have no idea how much stuff costs.   Doctors prescribe medications that their patients cannot afford to buy—even when cheaper alternatives are available.  We order tests not knowing what the patient is going to be charged.

This phenomenon occurs nowhere else in American culture.  It is kind of odd when you think about it.  It would be like going to the grocery store and having no prices on any of the food.  You could only get the meat that the butcher recommended, but he wouldn’t know the price of anything, either.   The first inkling you would have about costs would be when you got your bill in the mail a month later:  “Wow—that chuck roast was $200.00 a pound!”

This culture in medicine developed, I am told, due to the rise of third party payers.  Since someone else is paying the bill, we don’t care what it costs.  An example is the Medicaid patient who has a sore throat and calls an ambulance to take him to the hospital instead of a taxi.  It doesn’t matter that the ambulance ride is many times more expensive than the taxi, Medicaid pays for the ambulance but not the taxi.    Another example is that the co-pay for Blue Cross subscribers is the same whether they are prescribed a $700.00 medication or a $30.00 medication.

But things should be different in Correctional Medicine.  For the most part, we in corrections are (blissfully!) independent of insurance companies and government programs like Medicaid and Medicare.  In fact, part of our job is to be wise stewards of the money that the tax payers give us to run our medical program.  We want to be cost effective.  And how can we do that if we don’t know how much the medications, labs, and x-rays we order cost?

So today, we’re going to have a pop quiz to check your knowledge of drug and lab prices.  Be sure to mark your answers before you click to see the answers!

Question 1:  Which of the following replacement estrogens is the least expensive?  Which is most expensive?

Question 2:  Which of the following antipsychotics is least expensive?  Which is most expensive?

Question 3: Which of the following methods of ordering a blood count is least expensive?

A.  CBC with platelets and differential

B.  CBC with manual differential

Question 1:  A 30 day supply of each estrogen replacement would cost the following:

Comment:  Did you realize that Premarin is more than ten times as expensive as estradiol?  And, of course, they are biologically equivalent.  Do you ever order Premarin?

Question 2:  30 doses of each antipsychotic would cost the following:

Comment:  Who would have thought that chlorpromazine would be nine times more expensive than risperidone?  And how about that Abilify at $25.00 a pill?  Is it really 150 times better than risperidone?

Question 3: The cost of each blood test (at my lab, anyway) is as follows:

Question:  What is the difference between a Hemogram, automated and a CBC with platelets and differential?  Answer:  Nothing, except the cost!  You will get exactly the same information either way!  Which do you order?

I also think you should make a list of your top ten most frequently ordered laboratory studies and ask your lab what you are charged for each.

Do you have a tip on cost-saving that you would share with the rest of us?