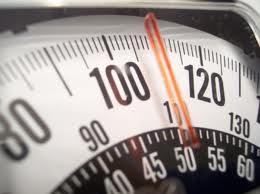 Patient weight is a powerful diagnostic tool that is underutilized in corrections.

The reason for this, probably, is that not much attention is paid to weights in outside medicine.  In a general medical clinic, say, a patient’s weight could be compared to their last routine visit and some general conclusions might be reached–such as “You have gained 10 pounds since last year.  This is not good for your general health.”

However, things are different in corrections.  Our patients are with us all the time–they never go home.  Many are “frequent fliers” in the medical clinic, either due to their medical problems or because they complain a lot.  I have found that patient weights in correctional clinics are a gold mine of useful information.  So much so, that I think a patient weight should be the Fifth Vital Sign.

Let me give you several situations where weights will help you.  Often, the patient weight is the only objective evidence you have to assess a patient complaint!

1.  “I’ve lost 30 pounds since I came to this jail and had to eat this stinking food.”  I have heard this complaint a surprising number of times.  If your facility weighed this inmate at admission, you would know immediately if this claim is valid.  When I do have an admission weight, often I can reply “Actually, your weight at booking was 178 pounds and your weight now is 180 pounds.  You have gained weight, not lost it.”

If you don’t know what the patient weighed at admission, well, it’s a hassle. All you can do is track the patient’s weight from that point forward and document that there is no further significant weight loss.  This, obviously, is more work than being able to say “No, actually, you have not lost a significant amount of weight.”

2.  “I haven’t kept anything down for the last 3 days.”  If you have a baseline weight to work with, it will help you decide how to approach this patient.  Let’s say this patient’s baseline weight was 145 pounds, and her weight today in clinic is 146.  In that case, probably her claim of having kept nothing down is an exaggeration.  On the other hand, let’s say her weight today is 141.  She may have lost 3 pounds.  I would be much more likely to consider IV hydration in addition to anti-emetics.

Either way, I can use her weight to monitor her response to whatever therapy I use.  If her weight is down 3 pounds and I am aggressively hydrating her, I expect her weight to return to around 145 within a day or two.  I do not want her to drop more pounds.

4.  “I’m retaining water.  Look how much my legs are swollen.  I need a water pill.”  This particular complaint is worth a detailed discussion (coming soon).  Suffice it to say here that if this patient’s weight is stable, her ankle swelling is likely due to dependent edema rather than “water retention.”  The appropriate therapy is not diuretics; rather, she should be instructed on elevating her legs when she can, exercise walking and possibly TED hose.

5.  Type 2 diabetics.  I have noticed that some Type 2 diabetics lose weight in jail–sometimes a lot of weight, probably because they can’t raid the refrigerator for Ben & Jerry’s  Chubby Hubby ice cream at 2:00 AM. If you have a documented weight loss in a particular diabetic patient of, say, 50 pounds, you often can seriously step down their diabetes therapy.

6.  Hunger Strikes.  If a patient eats nothing and does not exercise, he will lose approximately one pound a day.  You can use serial weights to monitor this.  If a patient is losing less weight than this, he is probably eating something.  On the other hand, I had one patient who would hand back empty trays, indicating that he had eaten.  However, his weight kept dropping.  It turned out that he was skillfully throwing away most of his food in the toilet.

Do you have other examples where weights helped you to make a diagnosis?  I would like to hear them!

3 thoughts on “Patient Weight is a Powerful Diagnostic Tool!”