After many years of reviewing prescribing practices of physicians both within correctional systems and outside of the walls, here is something that I strongly believe:

Non-Steroidal Anti-inflammatory Drugs (NSAIDS) just may be THE most misunderstood and overprescribed drugs in clinical medicine. It appears to me that, in general, we practitioners overestimate the benefit NSAIDS give. We underestimate the risks NSAIDS carry. And we prescribe NSAIDS in ways that are not evidence based and not in our patients’ best interest. 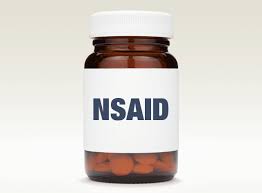 NSAIDS have two basic functions: they are used as general pain relievers, and they reduce inflammation. These are two separate properties, utilizing separate chemical receptors. NSAIDS are prescribed as pain relievers much more often than for their anti-inflammatory effect, so I’d like to begin there. Take, for example, a patient who complains of a headache. I’m not talking about a vascular headache, I mean the standard, ordinary headache that everyone gets now and again. In order to relieve this headache, should this patient take ibuprofen 400mg? or 800mg? Would a prescription NSAID, like meloxicam or an injectable NSAID, like ketorolac, work any better? Is there any benefit of NSAIDs in this case compared to acetaminophen?

The single most important fact to understand about NSAID pain relieving properties is this: the analgesic effect of NSAIDs “maxes out” at a much lower dose than the anti-inflammatory effects. As an example, the pain-relieving properties of ibuprofen max out at a dose of around 400mg. Patients get no increased analgesic effect from prescriptions of 600mg or 800mg of ibuprofen. This principle applies to all NSAIDs. There is no analgesic benefit from Naproxen 500mg over Naproxen 250mg. 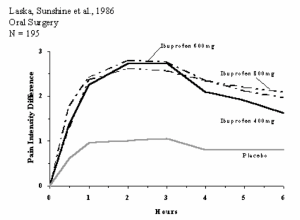 Can you see any difference in pain relief between ibuprofen doses in this trial?

However, the potential for NSAID complications increases both with larger doses and increased length of time that patients take NSAIDs. So why do we prescribe large doses of ibuprofen when patients cannot benefit and can only be harmed from such a dose? One possible reason could be the myth that “more is better.” If a little is good, then more has got to be even better! In the case of NSAIDs, however, this is not the case. If a bigger dose cannot help (because it gives no more relief from pain) but could harm the patient (by increasing the risk of adverse effects), then more is definitely not better.

The next essential NSAID fact is this: NSAIDS are equivalent as far as their analgesic effects. No one NSAID has ever been shown to be superior to another. They differ in their tendency to cause complications, but not in their ability to reduce pain. Despite the marketing, Celebrex is no more effective than ibuprofen. Toradol (ketorolac) is no more effective than any other NSAID. And in fact, NSAIDs are not superior to acetaminophen when used for pain relief in any clinically significant way. This is probably because both NSAIDs and acetaminophen act on the same biochemical receptor to reduce pain—though this receptor has not yet been identified (as reported here).

The final essential NSAID fact when used as pain relievers is this: The more a patient takes them, the less effective they are. Patients need to understand this. If you take Naproxen (for example) every day, twice a day, it will be less effective when you do have a headache than if you only take it once in a while. NSAIDs prescribed for pain should be prn prescriptions. This is true especially for patients with chronic pain. The guy with a bad knee that always hurts should not take scheduled doses of NSAIDs.

More on this this—plus NSAIDs used for their anti-inflammatory properties—in the next JailMedicine post. In the meantime:

1. The analgesic effects of NSAIDs maxes out at a low dose. There is no benefit to giving large doses for pain. Don’t do it!
2. All NSAIDs are equivalent as pain relievers. Use the convenient (and least expensive) one.
3. NSAIDs used as pain relievers should be prescribed PRN.

As usual, what I have posted here is my opinion, based on my own research and experience. Feel free to disagree! I could be wrong. If you do disagree, say why in the comments.

7 thoughts on “NSAIDs. The Essentials of Prescribing for Pain”