One of the more common complaints that I hear from correctional practitioners (especially new practitioners) is “Manipulative patients are driving me crazy!” To be honest, I ran into a lot of manipulative patients when I worked in the ER, as well. ERs are the epicenter of narcotic drug seeking! But it is true that many of our patients in Corrections are especially skilled in manipulation. They have practiced this skill their whole lives and have become very proficient. Most people, including correctional professionals, are not naturally skilled at dealing with manipulation. This is often not a skill that we have needed before coming to work in a jail or prison. But once there, learning to manage manipulation is an essential skill if you want to be happy in correctional practice. I call the art of dealing with manipulation “Verbal Jiu-Jitsu.” In order to become a skilled practitioner of verbal jiu-jitsu, we must first start with an analysis of what “manipulation” actually is.

1. The patient wants something she should not have. This something could be an extra mattress, a special diet, gabapentin, an MRI, a referral off site–anything.

2. The patient does not accept “No” for the answer.

What comes after not accepting “No” for an answer is manipulation. Manipulation is the attempt to coerce the practitioner into changing a “No” into a “Yes.” Manipulation comes in many forms.

1. Exaggeration: “This is the worst pain in the world!” “I can’t stand it any longer!” “I am so much worse now than when I came to prison!” Exaggeration is an attempt to make this a special case, worthy of special consideration compared to other patients. “I know you usually say no but no one else is hurting as much as I am!”

2. Belittling. “Only crappy doctors work in jails. No wonder you can’t understand how to treat my pain syndrome. My outside doctor gave me what I need–oxycontin. Now there was a good and kind doctor! You should be ashamed.” Belittling goes hand-in-hand with splitting.

3. Splitting. This consists of comparing you to someone else who would give the patient what he wants. The other person is commonly an outside practitioner. But splitting is especially effective when the other practitioner is someone within your own facility. “The other doctor who works at this prison gave an extra mattress to my cellie! And he is not in as much pain as I am!”

4. Threatening. This comes in various forms. First is the threat of physical violence. Inmates can get quite skilled at communicating physical threats without saying a word. A particular hard look of tight jaw, narrowed eyes, tense muscles and clenched fists–coming from a muscular guy with facial tattoos–can make anyone feel the hair stand up on the back of the neck, even if there is no way the inmate could/would ever act on the threat. The second type of threats are various forms of complaints. Basically, the inmate is saying, “If you don’t give me what I want, I’ll make your life miserable. I’ll force you to comply with my will.” Complaints may start with written grievances (that you have to spend time and effort to answer), but then can quickly escalate to letters written to the ACLU, formal complaints written to your State Board of Medicine, pro se tort claims and even malpractice lawsuits. Everyone who has worked in corrections for very long has heard these words: “You’ll be hearing from my lawyer!”

5. Fawning. Fawning is, of course, the exact opposite of threatening and belittling. Fawning is more common with female inmates, but males do it as well. “You’re the best doctor I have ever met! I tell all the other girls in the pod how great you are!” Many inmates are exceedingly good at fawning because, again, they have practiced their whole lives. A particularly insidious–and often effective–variation of fawning is flirting and sexual innuendo. “You always smell so good Dr. Smith. What cologne do you use?” I remember one inmate who told me “Dr. Keller, you really know how to wear a suit. I worked at a clothing store, so I know.”

6. Filibustering. Filibustering is being relentless in the demand that you change your mind. Filibustering is done in two distinct ways. Method one is this: “I won’t leave your office until you give me what I want! I will argue with everything you say.” An hour later, the patient is still haranguing you and your clinic schedule (as well as your nerves) are shot. Even more effective is the sequential strategy: “I will be in your clinic every week with the same complaint. Nothing you do (except for what I want) will ever work.” After 3, 5, or 10 visits for the same complaint of “intolerable headaches,” you might finally give in and write the prescription for gabapentin.

7. The straw man victim.  The “Straw Man” tactic is where the manipulator charges you with acting against a protected class rather than based on your clinical findings. “You’re only refusing me opioids because of my race/I am transgendered/I am Muslim etc.” (Thank you to Thomas Moll for pointing this one out!)

8. The Champion. A “Champion” is someone who pleads the patient’s case from the outside. The champion can be an attorney, an advocacy group, but most commonly is a family member. Champions use all of the manipulative techniques above, such as exaggeration, splitting and incessant filibustering. Since champions are not incarcerated, they have access to many people who inmates themselves cannot reach, such as the sheriff, the newspaper, and even the state governor. 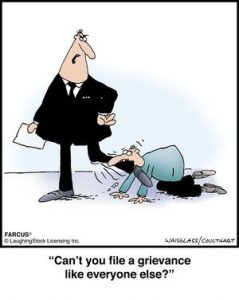 Coming soon: Verbal Jiu-jitsu strategies to deflect each of the manipulative techniques noted above.

What manipulative strategies have you encountered at your facility? Have I missed one? Please comment!