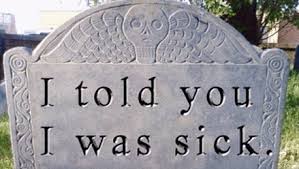 There are three reasons for this. First, the charge of “faking” gets you and everyone else so emotionally charged up that no one is thinking clearly. Second, you might be wrong — and heaven help you if you are! Third, calling someone a “faker” is counterproductive to your real goal of getting the patient to stop doing whatever it is he is doing.

The first important consideration of calling someone a “faker” or a “malingerer” is that these words cause yourself and others to have a strong emotional reaction instantaneously. When you say that a patient is faking or malingering, whether you are correct or not, what that patient and others understand is that you are calling him a liar. This accusation elicits an immediate powerful visceral response. You might argue: “I am using the term ‘malingering’ correctly according to its definition in the dictionary.” Nobody will care. The patient and everyone else hears “He’s a LIAR!” Those are fighting words! When people hear those words, they stop thinking and go into fight-or-flight mode.

So, ask yourself this: Is the medical information I am conveying when I say that a patient is faking so important that it outweighs the inevitable backlash of anger, frustration, and contempt? Such emotions will ruin what otherwise might have been a fine day. But more importantly, they will get in the way of good medical practice. If you are feeling anger and contempt towards your patient, you are unlikely to provide very stellar medical care for them — or for your next patient, for that matter. I don’t know about you, but when I get angry and frustrated at work, my brooding sometimes makes me less attentive to my patients. And I might even go home and snap at my wife as well!

The second important item to think about before calling someone a faker is this: What if you are wrong? Most of the time, you cannot know for sure whether a particular patient is really deliberately faking or not. Consider, for example, a man in an airport who is having a panic attack about the prospect of getting onto an airplane. He is rocking back and forth, hyperventilating. His heart rate is over 150, and he is dripping sweat. He will not speak to those around him. These are pretty dramatic symptoms, but I’ll bet that no one would say that this man is “faking it!” His panic attack is real. With this in mind, are we 100% sure that the patient in the jail cell who is twitching and incoherent is really faking it? If you get this wrong, you have a set-up for disaster.

I have consulted on several medical liability cases in which a patient was thought to be faking, was subsequently ignored, and had a bad medical outcome. If a patient is histrionic when he says, “My belly hurts,” his dramatic presentation can be mislabeled as “malingering,” and his acute bowel obstruction will be missed. Similarly, “I can’t breathe!” leads to “He looks fine to me,” which leads to “He’s faking.” And pretty soon, you are doing CPR. Anytime you hear the words “he’s faking” or “she’s malingering,” you have entered an area of high medico-legal risk. Be wary!

But what about patients who really are faking their symptoms? There are admittedly a lot of these in jails and in ERs. Let’s assume that our jail patient twitching on the floor really is faking his symptoms. Let’s also assume that he is doing this deliberately with the goal of getting out of jail so that he meets the definition of malingering. Now, correct me if I am wrong here, but isn’t our goal for him to stop faking? We want him to stop doing that twitch-and-moan thing and cooperate with us — in other words, behavioral modification. With this in mind, how likely is it that saying to him “I know you’re faking” will make him stop? To the contrary, malingerers who are accused of faking tend to redouble their efforts in order to convince you that you are wrong and that their symptoms are real! When a person has been publicly called a “liar,” he will want to regain his besmirched honor.

I have seen such patients try to force medical providers to believe them by being ever present in clinics with the same complaint, and by filing grievances and even lawsuits. Labeling a patient as a “faker” (even if you are right) has recast your relationship as adversarial. You are no longer on healthy terms of patient and caregiver. You are enemies now. How can anyone be on good terms with someone who has accused them of lying?

Let’s return to our patient in the jail who is shaking and incoherent on the floor of his cell. There are three possibilities as to what is going on with him. He could indeed be faking. Alternatively, he could be having something akin to a panic attack, which, of course, is not the same thing as faking. Finally, he could be having a serious medical event. The only way to know is to do a complete medical evaluation and intervention. With enough patients like this, you are eventually going to see all three. It turns out that no medical evaluation had been done yet on this patient because, well, “he’s faking it.” Once we did a physical exam and got vitals, we found that he had a heart rate of 158, a blood pressure of 83/60, and a blood sugar of 875. Off to the ER he went with a diagnosis of diabetic ketoacidosis. This was a narrowly averted disaster.

How could this mistake have happened? Well, once the patient had been labeled a “faker,” rational thought ceased. Nobody considered the possibility that they might be wrong! But another mistake was made as well, and that is this: doing nothing is the wrong approach, even if the patient is, in fact, faking it.

Fortunately, there is one very good solution to this conundrum, and that is for us not to use the word “faker” even if we strongly suspect it. Don’t even go there! There are other, better ways to approach a histrionic patient with a strange presentation. If we give up the judgmental attitude, then we’ll all feel better. More importantly, we’ll also practice better medicine.

As always, what I have written here is my opinion, based on my training and experience.  I could be wrong!

Do you have an opinion or experience dealing with this issue?  Please share in comments!

11 thoughts on “Is My Patient Faking?”