Consider the case of a 60-year-old patient I will call “Library Man.” While at the public library, Library Man took off most of his clothes and was talking loudly to no one in particular. The police were called, of course. He was charged with disturbing the peace and brought to my jail.

Jails basically have three types of housing areas. First are dormitory-style rooms with 60-100 residents. Library Man cannot be housed there—the young aggressive inmates would prey on him. Second are smaller cells that hold two to four inmates. The problem with these cells is that even if the jail could guarantee gentle cell mates, it would be hard to monitor Library Man in such cells. Such cells tend to be in out-of-the-way places and have small windows on the doors. The only place that Library Man can be reasonably housed in most jails is “Special Housing,” which refers in this case to a single-man isolation cell with lots of plexiglass to allow easy observation. Such rooms are designed to have nothing that someone could use to harm themselves, so they are made entirely of concrete and steel—even the bed. This is where Library man ends up—basically in a large concrete box.

Unfortunately, this is not a good place for Library Man to be. You may have guessed that Library Man is a homeless schizophrenic who had gone off of his meds. He is harmless–certainly not a danger to himself or to others. In his psychotic state, he does not understand why he was arrested and jailed. Library Man would benefit from familiar surroundings and normal social interaction with people. He will get neither of these in the alien and sterile environment of his concrete isolation cell.

I should make it clear here that I am not criticizing the jail. The jail medical and mental health personnel will do what they can to help Library Man. He is going to get back on his medications. If necessary, jail personnel will coordinate commitment proceedings. The jail social worker will work with outside psychosocial rehab services to help transition him back into the community. Library Man was eventually released after three weeks in jail.

The police officer who responded to the call from the library actually recognized that Library Man was mentally ill. But the local for-profit psychiatric facility would not take Library Man. The state psychiatric hospital is full and would only take him after a long commitment process anyway. There is a local Crisis Center, but they are not staffed to handle someone as sick as Library Man. The only option left to the police is to take Library Man to jail. And the jail has nowhere else to put Library Man except the concrete cell of Special Housing.

Sadly, Library Man is not an isolated case. Another recent patient housed in Special Housing was a developmentally delayed woman who had hit one of her caregivers at her shelter home. She is an adult in body but probably only 8 years old or so in on a functional level. She also does not understand why she is in a cold concrete room. “I want my Dad!” she wails. The jail staff try to calm her down with coloring books and Pikachu stickers during her several days stay in jail.

And it is expensive! Multiply the cost of housing Library Man times the hundreds of thousands like him incarcerated in our jails and prisons currently. That money would easily pay for effective community programs to keep the mentally ill out of incarceration.

What’s the solution to this problem? I confess that I don’t have the answers. The first step, though, is to recognize that a problem exists.  What happens inside the walls of a jail is often invisible. It needs to be made public.  Is this really what we want?

This article was originally published on MedPage Today, found here.

As always, what I have written here is my opinion, based on my training and experience.  I could be wrong!  Please tell us your opinion in comments. 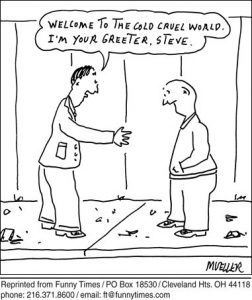 6 thoughts on “Is a Concrete Cell Really the Best We Have To Offer Our Mentally Ill?”