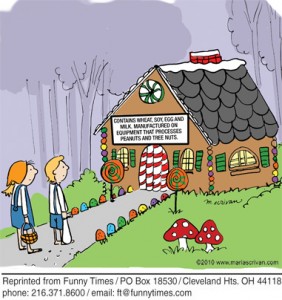 In my previous incarnation as an emergency physician (before I discovered “The Way” of correctional medicine), I saw a lot of cases of acute allergic reactions. It is a very common emergency complaint; I have probably seen hundreds in my career. But when I began my jail medicine career, I was still unprepared for the sheer volume of food allergies claimed by inmates. Who knew so many inmates had so many food allergies?

Of course, most of them don’t. Most just don’t want to eat something on the jail menu. Inmates believe that if they claim an allergy to a food they dislike, you cannot serve it to them. They will claim allergies to tomatoes, onions, mayo, etc., when really, they just don’t like these foods. Tuna casserole doesn’t seem very popular, for some reason.

However, some inmates truly are allergic to some foods and we can potentially harm them by ignoring their complaint. How do we correctional medical staff sort out the truly allergic from the “I don’t like it” crowd? It is an important question because we certainly don’t want anyone in our care to have a sudden anaphylactic reaction!

IgE is an antibody that is created by the body to react to a specific antigen substance. This substance can be ragweed pollen, of course, but it also can be food proteins. Later on, if the person eats the same food that triggered the creation of IgE, the protein locks onto the IgE, causing the release of inflammatory chemicals such as histamine, cytokinens, prostaglandins and leukotrienes.

The most common symptom caused by these inflammatory chemicals is hives, the itchy splotchy rash we have all seen. The second most common symptom is angio­edema, which is swelling of the face. Angioedema most commonly occurs around the eyes but also rarely can cause the tongue to swell. Third and less frequently, the allergic reaction can cause bronchospasm in the lungs, so the patient wheezes as if having an asthma attack. Finally, the patient can suffer anaphylaxis, which consists of acute vasodilation leading to hypotension, shock and possibly death.

All of these allergic symptoms occur within minutes of eating. Allergic hives that occur several hours after eating are probably not due to the food.

Of these four allergic symptoms, by far the most common are hives and angioedema. However, most of the time hives and andioedema are nuisances rather than life-threatening emergencies. On the other hand, anaphylaxis is an acute medical emergency. Anaphylaxis is the allergic reaction we should fear the most and work to prevent.

The Centers for Disease Control and Prevention estimates that approximately 100 deaths from food allergies occur in the United States each year. Almost all of the reported deaths occurred in teenagers or young adults who knew that they were allergic to the food they ate. By far, the most common culprit foods are peanuts and tree nuts (85%), with shellfish coming in second. In contrast, 400 deaths due to allergic reactions to penicillin occur every year, and most of those occur in people who have no idea that they are allergic.

Risk Assessment Tips
You can use these principles to do a risk assessment for individual patients. Patients at higher risk of an anaphylactic allergic reaction are those who are younger (late teens, early 20s) who state an allergy to peanuts, tree nuts or shellfish and who have had a previous documented allergic reaction. Patients with a lower risk are older patients who state an allergy to a low-risk food (say, onions or peppers) and cannot document a previous severe allergic reaction. Someone who has had a severe allergic reaction to a food in the past should be able to tell you about an emergency room visit, allergy testing, EpiPen prescriptions and how they avoid the food in restaurants and while shopping.

However, there are other tests that can help you sort out the confusing cases. The first is a CAP RAST test. This is a blood test that measures the levels of IgE to a certain specific allergen, say peanuts. We then draw blood for a CAP RAST for peanuts. A positive result is peanut-specific IgE of greater than 2.0 Ku/L. If the test comes back at, say, 0.35 Ku/L, then the patient is not allergic. The test is quite sensitive but not specific. That means that you can believe a negative result, but patients with positive results might still not be allergic. The main problem with a CAP RAST test is that it is expensive—around $45. However, that is probably less expensive than the cost in time and energy to put out a special diet.

A second test is the skin prick test. The patient’s skin is pricked with a small instrument and a drop of allergen extract is placed on the site. If a patient is truly allergic, she will form an itchy wheal at the site within 5 to 15 minutes. The advantage of this test is that it is cheap and easy to do and the results are immediate. The disadvantage is that you have to order and store the extracts and be trained in the procedure, usually by an allergist.

“Food challenge” tests probably should not be done in a correctional setting. This is where you simply feed the food to the patient and wait to see what happens. If this is done in a double-blinded fashion it is the most accurate test of all. Sometimes patients will have done their own food challenge without knowing it. For example, a patient might say he is allergic to eggs but admits to eating pasta and mayonnaise, both of which are made with eggs. He is likely not truly allergic.

Setting Policies
Of course, the easiest way to deal with the foods most likely to cause severe allergic reactions is not to serve them at all. Most jails do not serve shellfish to inmates. (If your jail does, write to me; I would like to know about it!) If your facility uses tree nuts in cookies, consider eliminating them from the menu. Then you won’t have to worry about it. That just leaves peanuts as the food served in most prisons and jails that has the greatest potential to cause allergic reactions.

Once you have discovered that a patient has a positive CAP RAST test to peanuts, what should you do? It may not be enough to simply order a peanut-free diet. Since allergic reactions can be triggered by even a small amount of allergen contact, you should consider these other factors:

1. You probably have peanut-containing items on your commissary. Should this inmate have a commissary restriction?

2. Should this inmate be allowed to work in the kitchen, preparing peanut butter sandwiches?

3. Should this inmate be housed with other inmates who may be eating peanut butter sandwiches right next to him?

4. What about an Epi-Pen? Where should it be kept?

I hope this information will make you a little more confident the next time an inmate says she is allergic to, say, “all vegetables” (as one patient told me once). You can also use these principles of risk assessment, history and testing to write a policy and procedure for the clinical assessment of food allergies. If you need help, e-mail me and I will send you mine.

Have you had problems with food allergies at your facility?  Tell us about it in comments!

This article was first published in CorrectCare Winter 2011

67 thoughts on “Food Allergies: Sorting out Truth From Fiction”