We correctional practitioners get to see a wide range of medical practice as we review the medical histories of inmates arriving at our facilities. I myself have seen many prescribing practices that make me scratch my head. One example I have run into repeatedly is the practice at many jails of using hydroxyzine to treat alcohol withdrawal.  It turns out that many jails do this.  I am not talking about hydroxyzine as an adjunct or an add-on to the primary agent. I am talking about hydroxyzine being used as the primary treatment agent itself.

In my opinion, this is a mistake, and should be stopped. 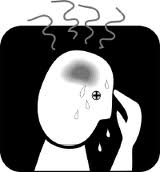 There is no theoretical basis to use hydroxyzine for alcohol withdrawal.

Alcohol withdrawal occurs due to the following mechanism:

Alcohol acts in the brain by stimulating the gamma-aminobutyric acid (GABA) system (remember this–it’s important), which both inhibits excitatory brain impulses and enhances inhibitory ones. The end result of this is the generalized slowing of reaction times and movements that we all recognize as drunkenness. With high-level repetitive drinking, the brain makes more GABA receptors, so that the same amount of alcohol will exert less effect on the GABA system. This process is called “habituation.” Over the course of many years, the brain can make a lot of GABA receptors so that alcoholics can be amazingly tolerant of the effects of alcohol. My personal record is a guy I saw in the ER who was walking and talking intelligibly with a blood alcohol of 0.59.
However, when alcohol is suddenly withdrawn, all of these many GABA receptors are suddenly unoccupied, which causes the opposite effect of intoxication: Excitatory brain impulses are enhanced and inhibitory brain function is suppressed. The result is the classic symptoms of alcohol withdrawal. Just like there are various levels of intoxication in various individuals depending on the number of GABA receptors reacting to alcohol (from pleasantly “buzzed,” to slurred speech, to staggering, to comatose, to not breathing), there are also various levels of withdrawal symptoms correlating to how many GABA receptors are unoccupied.  Like intoxication, withdrawal symptoms can range from mild (hand tremor only) to moderate (anxious, sweating and tachycardic) to severe (true Delirium Tremens) and death. 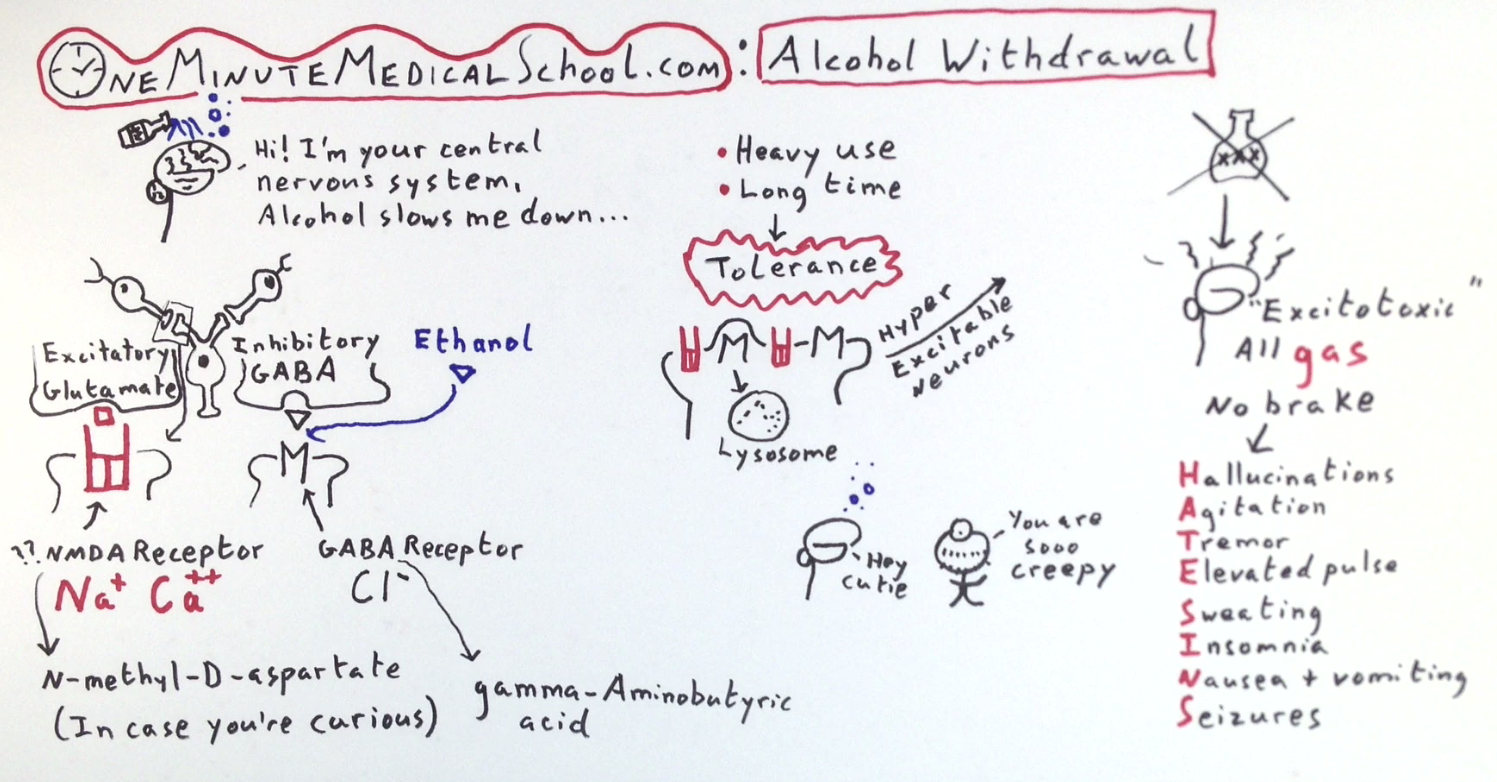 (You can find a very cool explanation of this process here!)

The key point here is that withdrawal is caused by exposed, unoccupied, irritated GABA receptors in the brain. The reason that benzodiazepines are so good at treating these symptoms is that they fit the GABA receptors! When you give a patient withdrawing from alcohol Valium or Librium, these drugs slide right into the empty GABA receptors and thus attack the problem of withdrawal at its source.

Hydroxyzine, on the other hand, does not fit the GABA receptors. Instead, hydroxyzine acts on the histamine H-1 receptor. This does cause a low level of sedation and neurological slowing, but since it does not act in any way, shape, or form on the GABA system, there is no theoretical way that hydroxyzine can perform as well as benzodiazepines in treating withdrawal—not even close.

There is no empirical basis for the use of hydroxyzine for alcohol withdrawal.

Based on this and many other similar studies, medical textbooks no longer recommended the use of hydroxyzine for alcohol withdrawal by the early 1970s, and instead recommended that “alcohol withdrawal should be treated with medications that have a similar chemical structure to alcohol”—like chlordiazepoxide. Two examples of textbooks published in 1972 that had already abandoned hydroxyzine in favor of chlordiazepoxide were The Merck Manual 12th ed. (from which the quote comes) and The Principles and Practice of Medicine 8th ed. (An interesting historical overview of the treatment of alcohol withdrawal can be found here).

Research since then has been done exclusively on benzodiazepines, agents such as phenobarbital and, more recently, seizure drugs like carbamazepine and valproic acid. However, since 1969, nothing, and I mean nothing has ever outperformed benzodiazepines as therapy for alcohol withdrawal. And hydroxyzine? Forgotten. I cannot find references to any studies using hydroxyzine for alcohol withdrawal since the 1970s. In those days, they were also using reserpine to treat hypertension. How many of us are still prescribing reserpine today? (If you are, I would like to hear about it)!

I know this because I spent some time and checked. Most of the textbooks and clinical guidelines do not even mention hydroxyzine at all among the various therapeutic options. All recommend using benzodiazepines as the primary treatment agent for acute alcohol withdrawal. A very few list hydroxyzine as a possible “adjunct,” meaning something that can be given in addition to the primary treatment agent. I personally don’t use hydroxyzine as an adjunct, however, for two reasons. First, there is no literature showing that this practice offers any benefit at all over treatment with benzodiazepines alone. Second, I don’t want anyone in my jails ever thinking that they can give withdrawal patients hydroxyzine instead of benzos.

Hydroxyzine is not used as a primary alcohol withdrawal agent in inpatient alcohol rehab centers outside of jails and prisons.

At least, almost every single alcohol rehab center and inpatient alcohol treatment center that I have ever come into contact with uses benzodiazepines. The one exception from my personal experience was a hospital that preferred to use phenobarbital for some reason. If you know of an inpatient alcohol detox center that uses hydroxyzine instead of benzos, I’d like to know about it! I personally doubt that such a facility exists.

You don’t have to be afraid to use benzodiazepines in a correctional setting!

I suspect that the reason that many jails have been using hydroxyzine instead of benzodiazepines to treat alcohol withdrawal is a desire to keep all controlled substances out of the jail for fear of abuse. This is a mistake for several reasons.

1. The benefits of benzodiazepine use for alcohol withdrawal (the best medication for a potentially life-threatening condition) clearly outweigh the potential for abuse.
2. Benzodiazepines used for alcohol withdrawal are only given for a short time—a few days at most. They should not be ongoing medications.
3. Patients being treated for alcohol withdrawal should be housed apart from the general population anyway, so that you can keep an eye on them. If they are not in general population, the risk of cheeking and sharing is very low.  I have also found that such patients are highly unwilling to divert their meds, anyway.
4. You will not be able to keep benzodiazepines totally out of your facility. They are too useful in a variety of important ways, such as inmates who need chemical sedation and methamphetamine intoxication. Also, inmates who arrive at the jail with a long history of benzodiazepine use should not have their benzos discontinued cold-turkey. This is dangerous. (More on this later).
5. It is usually pretty easy to sort out patients who are truly withdrawing from those who are faking symptoms—in my experience anyway.

Finally, if, after reading all of this, you are still adamant that you will not use benzodiazepines, there are better alternative agents available than hydroxyzine.

I mentioned earlier that many other agents besides benzodiazepines have been studied as treatment for alcohol withdrawal. None has ever been found that is superior to benzos. However, several anticonvulsants have been shown to be superior to hydroxyzine and are mentioned as therapeutic alternatives to benzodiazepines in textbooks and treatment guidelines. The two most commonly named are carbamazepine and valproic acid. If you insist on using something other than benzodiazepines for alcohol withdrawal, look these up!

As always, the views expressed here are my own.  Feel free to disagree!  I could be wrong.  But if you do disagree, please comment and say why!

What do you use to treat alcohol withdrawal at your facility? Do you, by chance, use hydroxyzine? Please comment!

25 thoughts on “Do Not Use Hydroxyzine for Alcohol Withdrawal!”