This post is the third in a series exploring how Correctional Medicine is different than medicine practiced outside of jails and prisons.  The previous two differences were The Principle of Fairness and All Clinical Encounters are Discussed Back in the Dorms.

There is a controversy in pediatrics that I have been following recently. Some pediatricians have been dismissing children from their practice if their parents will not allow them to be vaccinated. This practice has been criticized as punishing innocent children for the actions of their parents but the pediatricians defend it by saying they are just trying to protect their other patients from being exposed to pertussis, measles and other transmittable diseases in the waiting room. 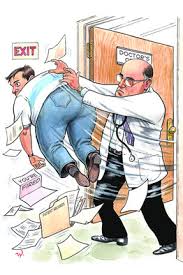 This story illustrates an extreme example of something that we all know: that the practice of “firing” patients is commonplace in outside medicine. Many of my jail patients have been dismissed from medical practices, some more than once! Patients can be fired for variety of offenses. Some violate the contracts of their pain clinics. Some are dismissed for simply not following the doctor’s advice—like to get their children vaccinated. Many are no longer welcome when they cannot pay their bills or have lost insurance coverage. (One orthopedist that I know routinely sends a dismissal letter to his patients on their 65th birthday since he refuses to participate in Medicare). Finally, patients can be fired for just being too difficult to deal with. One jail patient in particular I remember screamed drunkenly at his doctor’s secretary to the point that she called the police. He received his official dismissal letter while he was in jail.

I had a patient in my clinic the other day who became angry and, Hulk-like, swelled up into a veritable Roman Candle of F-bombs. I don’t tolerate this kind of behavior in my clinics (see How to Handle Swearing in the Medical Clinic) and had the deputies escort him back to the housing dorm—BUT (and this is a big but) he is still my patient. I cannot fire him! And I will see him again, hopefully when he is under more control. More on that later.

Our Patients Cannot Fire Us Either

The flip side of the same coin is that our patients cannot fire us either. On the outside, it is easy to change practitioners. Don’t get along with your doctor? She won’t give you what you want? There are ten more just down the street, especially if you have insurance.

We are all familiar with the concept of “Doctor Shopping,” in which a patient (usually drug seeking) goes to several different practitioners looking for the one that will give him what he wants. Just as common are “Doctor Accumulators,” who go to doctor A for one complaint, Nurse Practitioner B for a second problem, and so on.

Inmates in correctional institutions have lost this ability. The practitioner at that facility is their doctor. They have no say in the matter. Many become frustrated and angry about this situation, especially when the correctional practitioner will not give them what they want—which was the case with my “Roman Candle” patient.

Correctional patients sometimes respond to this by demanding access to a different practitioner. This very rarely works, though. In the end, the practitioner at their facility is the one they have to see, whether they like it or not.

Since inmates cannot fire their practitioner, they instead will often try to force their practitioner to do what they want using various forms of manipulation. This can range from confrontational verbal intimidation and the threat of lawsuits on one side of the spectrum to flirtatiousness and fawning (“You’re the best doctor I have ever known! And the only one who truly understands me”) on the other. We correctional practitioners encounter variations of these behaviors every day in clinic. But no matter how egregious such attempts at manipulation may be, we cannot respond by refusing to see the patient. Firing our patients is off the table.

New correctional practitioners MUST know the principles of Verbal Jiu Jitsu to do at all well in a correctional clinic. If they do not, clinical encounters will be stressful, unpleasant and unproductive. There is a high turnover among correctional physicians, and I personally think one major reason for this is that many do not have the verbal skills to deflect confrontations. Getting beat up verbally day in and day out eventually becomes intolerable.

But it doesn’t have to be this way!

Like anyone else, inmates go with what works. For example, if you respond to the threat of a lawsuit by giving in—well, you’re going to be threatened with a lot of lawsuits. Remember that inmates discuss every clinical encounter back in the dorms! This is such an important point that it is repeating. If you don’t have a good strategy for dealing with aggressive verbal confrontation, inmates will realize that this strategy works with you—and you will see a lot of it in your clinics.

The reward feedback to the inmate does not even have to involve getting what they want. They can read your body language and demeanor.  Just getting you upset may be all the reward they need! In fact, verbal confrontation is simply a habit with many. It is how some inmates have interacted with just about everybody for their entire lives.  In fact, that ingrained confrontational personality disorder is one of the very reasons they are in prison in the first place. And just like anyone else who become adept at something by practicing a lot, these inmates are very practiced and adept at verbal confrontations–much more than you and me.

Verbal Jiu Jitsu is what I call the verbal skills used to deflect and defuse verbal confrontations. Notice that I did not say “defeat” (though I was tempted because of the great alliteration). “Defeat” implies a battle and the whole point of Verbal Jiu Jitsu is to avoid doing battle.

Take Mr. Roman Candle, for example. There he is, in my clinic, fist clenched, red faced, and hurling F-bombs. Nurses, deputies and maybe even other inmates are watching. What should I do? The usual gut instinct of what to do is usually wrong.

Wrong response number one, compromise: “There is no reason to be angry! Calm down and we can work something out.” Mistake! If you compromise, you have established the precedent that throwing a tantrum and screaming is effective in influencing you to change your mind. Other inmates will learn this (every clinical encounter is discussed back in the dorms). The result is that you will see many inmates threaten to get angry and wait for you to compromise.

Wrong response number two, angry retaliation: Get right in his face and scream back, “Get out of my clinic! Who do you think you are!” In this case, the inmate did not get what he wants, but he did learn that yelling at you is an effective way of getting under your skin. Anytime he wants to push your buttons, even if solely for his own amusement, he knows how to do it. Also, you have ruined your own mood for the day. Your heart is jack-hammering, you’re sweating through your shirt and you now have a screaming headache (at least that’s what would happen with me). There was no good outcome here!

The Verbal Jiu Jitsu response is to defuse and deflect: “We’re done for now. Security will take you back to your dorm. We’ll talk again later after you’ve calmed down.” It’s important to say this without raising your voice and, if possible, to betray no emotion on your face. That way, there is no reward for the poor behavior. No compromise, no bargaining, no reaction. In a day or two, you can call the patient back to medical and confidently expect better behavior. Plus, since every clinical encounter is discussed back in the dorms, everyone else now knows that throwing a fit will not be successful with you. You will see fewer of them.

Many practitioners have never had to learn even rudimentary verbal defensive skills in outside practice. Some just said “Yes” to any request their patients made, so there was no need for confrontation. And if things got too uncomfortable, they always could just fire the patient! However, in corrections, we have to say “No” and we can’t fire our patients. So learning to deal with verbal confrontations and manipulation is an essential correctional medicine skill. Without it, practitioners will flounder, be unhappy and quit.

My good friend Dr. Bill Wright has written an excellent brief introduction to these verbal skills previously on JailMedicine, which you can find here: Verbal Aikido: A Guest Post by Dr. Bill Wright. (Dr. Wright says Aikido; I say Jiu Jitsu.  The principle is the same)!

It takes training, practice and time to master verbal defense skills. I find it interesting that Starbucks has an extensive program to teach their employees how to deal with difficult customers (found here), but we in corrections have no such training program! 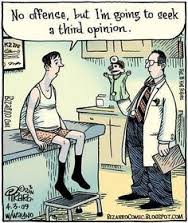 4 thoughts on “Correctional Medicine is Different: We Can’t Fire Our Patients—and They Can’t Fire Us!”