As we all know from long experience, hypertension is the single most commonly seen and treated condition in primary care medicine. It is an important risk factor for strokes, heart attacks, kidney failure and overall death. It has been exhaustively studied. And yet there is still significant controversy over hypertension, including how to define it and what the best agents for treatment are.
Against this background, The 2014 Evidence-Based Guideline for the Management of High Blood Pressure in Adults was released last December in JAMA. It was written by the 8th Joint National Committee, and so, of course, is referred to as JNC 8.

JNC 8 has a couple of important and surprising changes from JNC 7. One of these, at least, is controversial enough that some members of the committee rebelled and released a dissenting “Minority Report” (apologies to Tom Cruise). Today’s JailMedicine post is a summary of JNC 8 recommendations and changes to JNC 7. 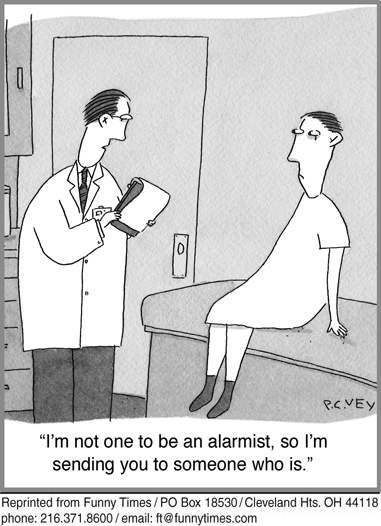 Interestingly, JNC 8 had no official sponsor. The National Institutes of Health (NIH), via their National Heart, Lung and Blood Institute (NHBLI), had sponsored each of the previous seven JNC reports. However, the NHBLI had previously announced that they are no longer in the guideline writing business . The JNC panel chose not to pursue other sponsors, in part because of concerns about conflict of interest. Bottom line: this may be the last JNC report ever. And that’s too bad. Read it well!

JNC 8 only considered data from randomized controlled trials (RCTs). This is in contrast to JNC 7, which also considered evidence of lesser quality, such as observational studies and meta-analyses. Emphasis on these RCTs led to the JNC 8 recommendation to change blood pressure goals in the elderly (discussed below). A minority of panel members felt that lesser quality evidence should also have been considered on this issue and published a dissenting view.

JNC 8 does state that JNC 7’s definition of hypertension as a blood pressure greater than 140/90 “remains reasonable.”

This was JNC 8’s most important new recommendation. And the most controversial.

This is the recommendation disputed by a minority of the JNC 8 panel.  If you would like to read their reasoning, you can find it published here in the Annals of Internal Medicine.

In those patients below 60 years old, the goal of diastolic blood pressure control is less than 90mm HG.

Interestingly, JNC 8 found no RCT, really, that supported this particular recommendation. So the goal of lowering systolic blood pressures to less than 140mm HG, when rated for quality, is an “expert opinion,” or “E,” recommendation. (Remember that the evidence behind recommendations such as this are rated on a scale ranging from A—the strongest evidence, to B, less so, to C even less certainty, to a low of E, which means there is no good objective evidence for this recommendation at all, but nevertheless, clinical experts believe it is true).

Recommendation 4 says that the blood pressure goal for those patients with chronic kidney disease is 140/90, just like every other hypertensive patient.

Recommendation 5 says that the blood pressure goal for diabetics is, again, 140/90.

Remember that JNC 7 had recommended getting the blood pressure in diabetics down to below 130/80. JNC 8 now says that this goal is “not supported by” the available evidence.

The initial drug of choice for the treatment of hypertension in non-black patients (including those with diabetes) should be one of these four classes of medications:

JNC 8 concludes that each of these has comparable beneficial effects in reducing death, stroke, heart disease and kidney disease.

JNC 8 does not recommend any of the following for the initial treatment of hypertension:

1. Beta- blockers. This is important because it is still so commonly done. I see patients all the time in my jails who are taking only a beta-blocker for their hypertension.
2. Central alpha-2 adrenergic agonists like clonidine. This is important because these drugs are now being commonly prescribed as psychiatric drugs. And patients on clonidine will say that it is being used to dually treat their nightmares and their hypertension.
3. Alpha blockers like Prazosin.
4. Loop diuretics like Lasix.
5. Vasodilators like hydralazine
6. Aldosterone receptor antagonists like spironolactone.

In black patients (including those with diabetes), the initial drug of choice should be either:

Patients who have chronic kidney disease as well as hypertension should be initially treated with either:

Selections or recommendation 9 are presented here verbatim, with my comments in italics:

1. If goal BP is not reached within a month of treatment, increase the dose of the initial drug or add a second drug from one of the class in recommendation 6 (thiazide-type diuretic, CCB, ACEI or ARB). This is important because I often see drug regimens being changed sooner than one month in corrections, because it is so easy to monitor blood pressures more frequently than this.

2. If goal BP cannot be reached with two drugs, add and titrate a third drug from the list provided.

3. Do not use an ACEI and an ARB in the same patient.

4. If goal BP cannot be reached using the drugs in recommendation 6 because of a contraindication or the need to use more than three drugs to reach goal BP, antihypertensive drugs from other classes can be used.

5. Referral to a hypertension specialist may be indicated for patients in whom goal BP cannot be attained using the above strategy.

This marijuana detox kits will not harm your liver and kidneys, and what is more – it will help you to look better owing to marvellous purifying effect of natural cleansers. It is a legal and safe way to pass marijuana drug test and also to feel and look better.

Concise Synopsis of the Most Important Changes in JNC Hypertension Recommendations

Remember these points if nothing else!

2.  The BP treatment goal for all patients under the age of 60 is 140/90.   This includes patients with diabetes and kidney disease.

3.  Use a thiazide diuretic, a calcium channel blocker, an ACE inhibitor or an ARB preferentially to treat hypertension.  Do not routinely use other drugs, including beta-blockers.

How do you treat hypertensive patients at your facility? Do you have an opinion as to the controversial aspects of JNC 8? Please comment!

5 thoughts on “Changes in Hypertension Treatment? Why Yes! The Recommendations of JNC 8”