Everyone who has worked in corrections for any length of time accumulates a litany of anecdotes about the funny and crazy things that go on. These tend to get passed around whenever correctional personnel get together at parties or conferences. Invariably, someone eventually says, “You know, someone should write these stories down.” Well, finally someone has.

Dr. William Wright has published a sparkling and humorous memoir of his time working in a county jail entitled “Jailhouse Doc.” This book is well worth reading. In fact, it is almost a “must read” for those of us who work in correctional medicine. Not only is it the only book I am aware of about jail medicine, it is well written, funny and informative. 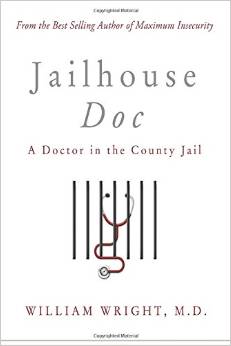 Dr. Wright got into correctional medicine after he retired from a career as a subspecialized ENT surgeon. Bored with retirement, he accepted a position as a doctor in the Colorado prison system. Dr. Wright’s first book about his adventures in correctional medicine was entitled “Maximum Insecurity” and dealt with his years working in Colorado’s supermax prison. (I reviewed that book here).

Eventually, he was offered a position as Medical Director at the El Paso County jail in Colorado Springs. “I figured,” he writes “that after the supermax, taking care of a county jail would be a piece of cake.” However, those of us who have worked in both settings know that prisons and jails are two very different dogs. Dr. Wright found this out too: “I quickly discovered that I needed a whole new set of skills . . . It was like running a third-world emergency room.”

“Jailhouse Doc” does a wonderful job of describing what medicine in a county jail is like. “My patients at CJC were incredible reservoirs of chronic neglect.” Dr. Wright relates many stories about the patients he sees at the county jail whose assorted and severe medical problems received no attention outside of jail. Since most patients in county jails stay for less than a month, there is only a short window of opportunity to make any difference in their lives. “Edward,” for example, had uncontrolled diabetes and hypertension—and alcoholism.

“If Edward stayed under my care for long enough, I’d get his blood sugar regulated . . . but I had no illusions about my effectiveness.  In all probability, Edward would be back on the streets in a short time and regress into the alcohol again.  At best I’d put a temporary band-aid on his diabetes, which would soon slough off and be forgotten.  I’d referred Edward back to an outside homeless clinic (but) for the clinic to work. Edward first had to show up, something that was unlikely to happen.”

Being a long-time practitioner in county jails, I can tell you that Dr. Wright is dead-on in his analysis of these social problems.

But “Jailhouse Doc,” like Dr. Wright’s first book, contains many laugh-out-loud moments, as well. For example, this about the accuracy of medical histories provided by inmates:

“For the most part, my jail patients don’t know their medical histories. They’re not even sure what substances they shot into their veins last night.”

Or this, about one particular patient:

“I can see the problem sitting here in front of me whistling Dixie through his meth-ravaged teeth.”

Most of the chapters deal with a specific topic relating to jail medicine. There are chapters on the art of smuggling contraband, suicide, infamous Inmates, and personality disorders. One particularly useful chapter on “Verbal Aikido” discusses effective techniques for diffusing inmate manipulations. Immigration and Customs Enforcement (ICE) merits its own chapter, as well, which is good, since all of us who work in jails must deal with the ICE detainees and the infamous ICE bureaucracy.

I was particularly interested in the “Detox Center” that was attached to the jail but not formally part of the jail. As part of his contract, Dr. Wright had to provide medical care for the patients in this “detox center.” However, since he could not dispense any drugs, no actual detox took place. The “Detox Center” was simply a place where alcoholics and addicts could go to stay a night or two and maybe get referred out to a rehab clinic. I found this strange, since real detox using medications is an everyday concern at my jails–and an interesting process.  I hope that Dr. Wright will deal with this in a future book!

I was also interested in the chapter in which Dr. Wright relates his experience being accused by an inmate of inappropriately touching him. As part of the investigation into this allegation, Dr. Wright had to submit to a lie detector test. He passed, but since lie detector tests are not perfect, this could potentially have gone very badly. This chapter underscores a basic rule of correctional medicine that I teach all my new employees: Never, ever be alone with an inmate! In fact, I think this chapter is going to be required reading as part of my company’s orientation.

Unfortunately, “Jailhouse Doc” does not end on a positive note. Dr. Wright had serious conflicts with his Sheriff and Undersheriff, who demanded special and often inappropriate medical treatment for some inmates. I myself have also butted heads with jail administrators and Sheriffs over jail medical care, but never to the degree has that Dr. Wright describes. In the end, the company that hired him did not have his back and he left the jail to return to prison medicine.

“Jailhouse Doc” is a great book, a fun read and a worthy successor to “Maximum Insecurity.”

As before, Dr. Wright will send a PDF of the book free to readers of JailMedicine. All you have to do is indicate in comments below that you would like to receive the book this way.

For those of you who would rather have a bound copy (I prefer this, myself), here is the link to purchase the book at Amazon.com.

Have you read “Jailhouse Doc” yourself?  What did you think?  Please comment!