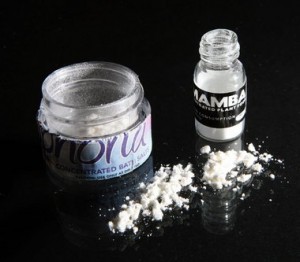 Last Monday, July 9th, President Obama signed the Synthetic Drug Abuse Prevention Act of 2012 (found here), which outlaws the Bath Salt ingredients MPVD and mephodrone along with 29 other synthetic chemicals.  (The other compounds mentioned in the new legislation are synthetic marijuana, which are similarly marketed as “incense,” but really designed to be smoked to get high).  The law was sponsored by Senator Charles Schumer, who comments here that “President Obama’s swift approval of this federal ban is the final nail in the coffin for the legal sale of bath salts in smoke shops . . . throughout the  country,”

Unfortunately, the new law does not include methylone or any of the new designer bath salts.  Evidently, it is pretty easy for an enterprising chemist to slap a new inert side chain onto one of the banned drugs to make a new, legal, drug.  Here is an interesting article on designer drug chemistry.

Since the Synthetic Drug Abuse Prevention Act of 2012 names specific compounds and does not address this problem of rapid “analogue” creation, it may not achieve its goal of eliminating the legal sale of bath salts.  See, for example, New Federal Ban on Synthetic Drugs Already Obsolete. Also, Federal Law Banning Synthetic Drugs May Not Be Effective, Some Experts Say.

But it is a start and the legislators who crafted this bill appear to understand the law’s shortcomings.  For example, here is a comment by R. Gil Kerlikowske, who, in case you (like me) have never heard of him, is the Director of the Office of National Drug Control Policy at the White House: “We expect that this law will have an impact on illicit sales of these newly scheduled synthetic drugs, at least in the short term.  However, Federal and state agencies will have to continue to update the list of banned substances as new synthetic compounds emerge.“