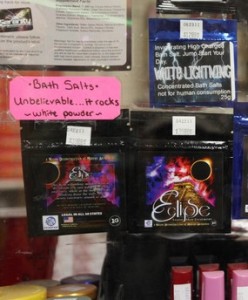 It used to be that “Bath Salts” were, well, salts that you would use in a bath.  Not anymore!  Nowadays, “Bath Salts” refers to a designer drug of abuse that is marketed like traditional bath salts to give legitimacy to the transaction.  They are also marketed as computer screen cleaners, jewelry cleaners and bug spray.  They are, of course, not intended to be used for any of these purposes; they contain synthetic designer drugs used to get high.

Most bath salts are thought  to contain one of three active synthetic drugs: mephodrone, methylone or MDPV (methylenedioxypyrovalerone), collectively called “cathinones”.  These are not new compounds.  They were originally synthesized in the 1920s as stimulants to treat fatigue.  What has changed is this new and successful marketing concept. 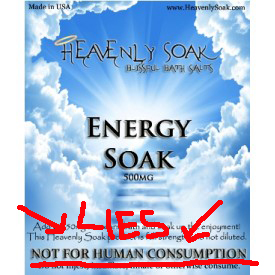 Since they are packaged ostensibly as bath salts “not for human consumption (wink, wink),” they bypass the Federal Analog Act, which states that compounds substantially similar to illegal substances are also illegal but (here is the loophole) only if they are “intended for human consumption.”  Thus, bath salts were originally  legal in all 50 states.  28 states have since made them illegal (examples Florida, Illinois, Pennsylvania and many others), but they are still a legal commodity in some (California and Arizona, for example).

Also, designer drug chemists are creating new synthetic variations of the original compounds.  If your legislature outlaws one compound, the new variation may still be legal.  Here is an interesting story originally aired on NPR about this phenomenon.

Bath salts can be swallowed, snorted, injected or smoked.  They act as dopamine/norepinephrine reuptake inhibitors resulting in amphetamine-like effects:  euphoria and increased alertness plus tachycardia, hypertension, dilated pupils, and sweating.  Anxiety, panic and agitation are common and patients sometimes experience hallucinogenic rages.  This is all very similar to the cocaine and methamphetamine effects we are all familiar with.  And like methamphetamine, bath salts can induce intense cravings.

Bath salts do not show up on the typical drug screen used at most facilities and ERs.  In fact, most local labs cannot screen for cathinones at all.  The only facility in the country I am aware of that can test for bath salts is the National Medical Service in Willow Grove, Pennsylvania.  Local labs can send specimens there for analysis, but the turn around time is 7-10 business days.  If you really need to know if a patient has been using bath salts, that is the way to go.

Bath salts, like amphetamines and other drugs of abuse, show up in jails in two ways:  Inmates are booked while still under the influence, and they are smuggled in.  I saw an inmate in clinic recently for some complaint that I cannot recall, but noticed that he had a resting heart rate of 136, dilated pupils, and a fine sheen of sweat on his forehead.  He had been in jail for months, and had always previously had normal vital signs when seen in clinic.  He was on no prescribed meds that would cause these symptoms.  A urine tox screen was negative for amphetamines, which would have accounted for these symptoms.  The most likely explanation is that someone in his dorm had smuggled in some bath salts.  The “high” from bath salts lasts for 3-4 hours, but the tachycardia and other metabolic effects can last much longer.

Treatment for bath salt intoxication, when needed, usually consists of benzodiazepines to counteract the amphetamine-like effects.  Some patients may be sick enough to need to go to the ER.  Also like amphetamines, withdrawal does not typically have to be treated.  This particular patient needed no intervention other than observation until his exam and vital signs normalized two days later.

Have you had problems with bath salts in your facility?  Have you seen an interesting case involving bath salts?  Please comment!