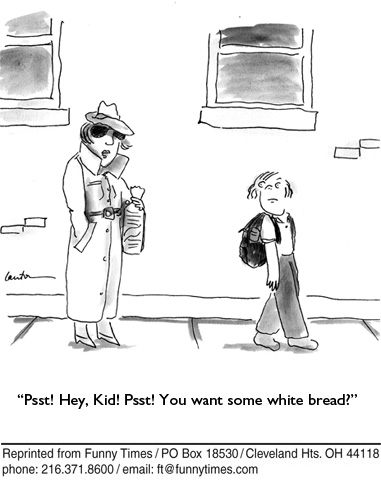 I had an obese Type 2 diabetic patient at one of my jails recently who wrote a long grievance about not receiving a bedtime snack.  He argued in the grievance that he had received a bedtime snack at previous facilities where he was incarcerated (which was true) and a bedtime snack was “the standard of care” for Type 2 diabetics.  I thought that this argument was ridiculous, especially since this patient routinely purchases lots of candy bars and Ramen Noodles from the commissary (think 30-40 candy bars a week).

However, despite the fact that bedtime snacks are routine at many correctional facilities, I believe that bedtime snacks for Type 2 diabetics in a correctional setting is, in most instances, a bad idea and bad medical care.   I would like to discuss why this is so by discussing what our overall goals for Type 2 diabetic management are, where the whole idea of diabetic snacks came from in the first place, and then present three cases.

What Are Our Dietary Goals for Type 2 Diabetics?

Let’s begin by agreeing on our overall treatment goals for Type 2 diabetics.  Type 2 diabetics have a disorder of carbohydrate metabolism.  We call this “Insulin Resistance.”  However, this does not mean that the insulin that the patient produces is damaged or malfunctioning; it means (simplistically stated) that the insulin is being overwhelmed by the amount of work it has to do.  So the first principle of Type 2 diabetes management is to decrease consumption of carbohydrates, especially quickly absorbed “white” carbohydrates like sugar and processed flour.  When we order a “Diabetic Diet” in a correctional setting, that is what we are getting:  Fewer carbs, especially sugar and other quickly absorbed carbs.  This decreases the pressure on the pancreas to make ever more insulin.

The second overall treatment goal of most Type 2 diabetics is for most patients to lose weight.  Type 2 diabetes is intricately tied to fat stores, to that point that many Type 2 diabetics can literally be cured if they lose enough weight.

But what happens when we prescribe a diabetic snack?  As is routinely done in the correctional centers I have seen, the diabetic who gets a snack receives MORE calories and MORE carbohydrates than the non-diabetic counterpart.

History of the Diabetic Snack

So where did this idea that diabetics need a night time snack come from?  As far as I can determine, there were 2 historical sources of this practice.  The first was a concern for hypoglycemia.  When the oral hypoglycemics and long acting NPH insulin came on the market, the concern was that if a patient was not absorbing carbs steadily throughout the night, the hypoglycemic agent would make them hypoglycemic during the night.  It is important to remember that at the time, there was no quick and easy way to measure current blood sugar levels.  The first oral hypoglycemics, the sulfonylureas, were introduced in the the 1940s and NPH insulin was introduced in 1950.  However, the first finger stick glucose measuring systems were not mass marketed until the 1980s.  So for the first 30 years or so that long acting insulin and oral hypoglycemics were used, there was no way to easily know what a patient’s blood sugars were running.  Night time was thought to be the time of highest risk for hypoglycemia, so it made sense for the patient to have a stomach full of carbohydrates in case they were needed.

That is not the case nowadays.  We can quickly and easily know exactly what an individual patient’s bedtime sugar is.  If the patient’s bedtime blood glucose level is 400, there is little chance they are going to become hypoglycemic overnight.

So there is a correct way to incorporate a bedtime snack for a Type 2 diabetic, that is to basically have four meals instead of three.  At breakfast, lunch and dinner, the diabetic will consume fewer calories thatn the non-diabetic counterpart, but will make up those calories with the fourth meal–the bedtime snack.  I just have never seen it done that way.

To summarize, the benefit of a bedtime snack for a Type 2 diabetic is to prevent hypoglycemia.  The potential adverse consequence of a bedtime snack is that the patient receives extra calories and extra carbohydrates that not only are not needed, in fact are bad for the long term health of the patient.

Let’s discuss these principles in relation to three hypothetical patients:

I actually cannot think of a situation in which a night time diabetic snack would be beneficial to a Type 2 diabetic.

The last factor to consider with regards to this practice is the cost.  How much money does your institution spend on bedtime snacks?  If they are not helpful, and maybe even harmful, that is money wasted that you could better spend on other things.  As an example, the Idaho Prison system (a small prison system by national standards) spends just over $84,000.00 a year on bedtime snacks for diabetics.  That may not be much in a budget of millions of dollars, but $84,000.00 is $84,000.00.  If bedtime snacks give little or no benefit, then this money would be better spent on something else.  I personally can think of at least one way this money could be used much more beneficially in the Idaho Department of Corrections–$84,000.00 a year would easily fund an Electronic Medical Record system.  Patients in the IDOC, in my opinion, would get much more tangible medical benefit from an Electronic Medical record than they are getting from bedtime snacks.

This is an editorial.  You are free to disagree.

Do you have an opinion about diabetic diets?  Please comment!