A frequent complaint in jails comes from inmates who request extra food for various reasons–they are underweight, they are just way hungry, whatever.
Meth addicts, in particular, seem to arrive at the jail ravenously hungry, I guess because they have been tweaking instead of eating.  At many facilities, inmates ask for “Doubles,” which means double food trays with every meal.  “Doubles” are very popular with inmates as you might imagine.

In general, a request for extra food falls into the broad “Comfort Items” category that also includes requests for own shoes (discussed here), double mattresses (discussed here), extra blankets, warmer clothes, bottom bunk, my own bra (nothing at the jail fits) etc, etc. These requests are unique to correctional medicine.  Nobody goes to a medical clinic outside of jail with the chief complaint of “I need a softer mattress” or “I need double portions at each meal and my wife won’t serve it to me.”  (At least, in 25 years of emergency room practice I never saw any such complaints). 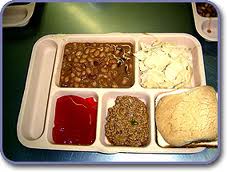 The request for extra food is a little different from, say, a request for a double mattress because some patients really do have a legitimate medical reason for extra Calories.  Before we discuss such patients, however, there are several items that we should keep in mind.

1.  Most correctional institutions offer between 2,500 and 3,000 Calories per day to each inmate.  This is far more Calories than the typical patient needs.  A “quick-n’-easy” calculation for the number of Calories a particular person needs to eat to maintain their body weight is this:  12 times body weight (in pounds).  For the standard 175 pound male (like me), that works out to 12 x 175 = 2,100 Calories per day.  If I were to eat a jail diet of 2,500-3,000 Calories a day, I would gain weight.  Because of this excess of dietary Calories, significant weight gain while in jail is a significant problem.

(As an aside, I remember seeing one inmate who had just been released from jail waiting for his ride home wearing boxer shorts and carrying the pants that he had been booked in 8 months previously–he could no longer fit into them.  His boxer shorts had little hearts on them, no lie.  Another inmate gained so much weight that he could no longer wear his dentures).

The problem is even worse for women, who are generally smaller and need less food but who are served just as many calories as the men.  Here is an interesting article sent to me by my friend Katie Clark that discusses this very problem: Study Examines Diet, Exercise,Obesity in Prisons Worldwide.

So even if underweight inmates are not given access to extra calories, the standard correctional diet is usually enough for them to gain weight.

2.  Most inmates already have access to extra Calories via commissary food.  Of course many inmates do not have access to commissary, like those who are indigent and those who have administrative sanctions (like lock-down).  Also, there is at least a one week wait in most jails from the time of booking until an inmate can conceivably receive extra food items from commissary. The meth addicts arrive at the jail ravenously hungry and have a hard time waiting a week for extra food. Also, commissary food is mostly junk food with little nutritional value. However, if you routinely check the commissary purchases of those who request “Doubles,” you will invariably run across someone who has been purchasing lots of commissary food and is requesting “Doubles” for non-medical reasons, discussed below.

3.  Inmates often request extra food for many non-medical reasons.  These include the ability to eat more of their favorite foods rather than foods they do not like, the ability to give extra food away as favors and as a sign of increased status among other inmates.  Like it or not, extra food, whether it is “Doubles” or diabetic snacks, is a highly desirable commodity in the inmate economy.  Those to whom we grant extra food gain privileged status and those who we refuse, resent it.  This is a very important principle, the Principle of Fairness.  Ignore this one at your peril!

Having said all of this, the big question is “Which patients would medically benefit from extra food?”  The answer is: those patients who are malnourished.  One objective sign of malnourishment are those patients who are demonstrably underweight on a Body Mass Index, like the one here.   A BMI of less than 18.5 is defined as underweight.  A BMI of >18.5 is defined as being normal weight.

Using a BMI of <18.5 as a cutoff makes it easy to identify patients who may benefit from extra calories.  This can quickly and easily be done by the nursing staff.  Patients who request “Doubles” have their height and weight measured by the nurses and plotted on a BMI chart.  Those with a BMI of >18.5 are told that they are normal weight and that they do not qualify for extra Calories.  Those with a BMI of <18.5 have extra Calories ordered and are scheduled for a recheck of their weight in one month.  If their weight then is >18.5, the extra Calorie order is rescinded.  Patients with a BMI of <17 are deemed seriously underweight and are scheduled into medical clinic for a complete physical to ascertain why they are so skinny.  The nurses, of course, can refer anyone else to the medical clinic who they are worried about.

At the Ada County Jail in Boise, Idaho, the nurses have placed a BMI chart next to the scale in the medical clinic waiting room along with an explanation of the 18.5 BMI cutoff.  It is a common site to see inmates checking their BMI on the chart and then deciding not to submit a medical request.

“Doubles” is not the best way to provide extra Calories

For those patients who do qualify for extra Calories based on a BMI of <18.5, the next question is how to give them the extra Calories.  I believe that authorizing “Doubles” is a poor solution to this problem for several reasons:

Instead of double trays, a much better way to provide extra calories is by giving qualifying inmates one or two cans of supplemental nutritional drinks like Ensure or Boost each day, say one at breakfast and one with dinner.  I can tell you from experience that these have very little value in the inmate economy.  (You can prove this by putting them on the commissary and seeing how many you sell!  They are not popular).  In fact, once you switch from “Doubles” to Boost, your medical requests for extra calories will drop by 80%.  No exaggeration.

There are other patients who will benefit by getting Ensure or Boost supplementation even though they might have normal BMIs.  One example is alcoholics.  Especially when they are going through withdrawal, they often have trouble eating.  Often, it is easier to get liquid Calories into them (Boost) rather than solid calories.  It is often the same story with chronically ill patients, say those receiving cancer chemotherapy.

How do you handle requests for extra nutrition at your facility?  Please comment!